I mentioned before that the Church History Museum in Salt Lake City, as awesome as it is, includes a few displays that are misleading because they reflect Mesomania.

I visited the Museum again today and noticed that a problematic display still hasn't changed.

The display depicted below discusses the 1830 mission to the Lamanites, but refers to it as "The Indian Mission." This is fine, in the sense that the general public today does not know who the Lamanites are. 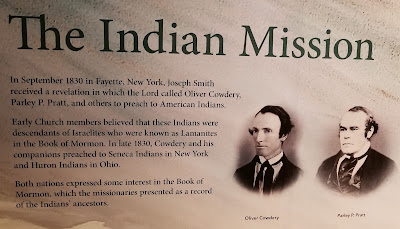 The problem is, many LDS people don't know this either. But they should, if they know the scriptures and Church history.

Because of the influence of Mesomania. Our intellectuals who promote the Mesoamerican/two-Cumorahs theory don't want people to realize that the Doctrine and Covenants identifies the Indians living in 1830 New York, Ohio, and Missouri as Lamanites. These are the only people specifically identified in the scriptures as Lamanites.

Nowhere do the scriptures refer to Mayans (or anyone else) as Lamanites.

The scriptural fact that the tribes in the Northeaster U.S. (the Missouri Indians had been removed there by the Federal government) are the Lamanites undermines the Mesoamerican/two-Cumorahs theory. That's why this display says what it does.

I don't think Mesomania is a valid excuse for continuing to mislead patrons of the museum.
_____

The Lord called Oliver Cowdery to go on a mission to the Lamanites in D&C 28:8

8 And now, behold, I say unto you that you shall go unto the Lamanites and preach my gospel unto them; and inasmuch as they receive thy teachings thou shalt cause my church to be established among them; and thou shalt have revelations, but write them not by way of commandment.

5 Behold, I say unto you, Peter, that you shall take your journey with your brother Oliver; for the time has come that it is expedient in me that you shall open your mouth to declare my gospel; therefore, fear not, but give heed unto the words and advice of your brother, which he shall give you.

6 And be you afflicted in all his afflictions, ever lifting up your heart unto me in prayer and faith, for his and your deliverance; for I have given unto him power to build up my church among the Lamanites.

1 And now concerning my servant Parley P. Pratt, behold, I say unto him that as I live I will that he shall declare my gospel and learn of me, and be meek and lowly of heart.

2 And that which I have appointed unto him is that he shall go with my servants, Oliver Cowdery and Peter Whitmer, Jun., into the wilderness among the Lamanites.

3 And Ziba Peterson also shall go with them; and I myself will go with them and be in their midst; and I am their advocate with the Father, and nothing shall prevail against them.

Now, look closer at the text:

What about the Lord Himself? After all, it was the Lord who gave these regulations to Joseph Smith.

The missionaries did this because the Lord told them to do so when they were called on their missions. Joseph taught the Indians the same thing; i.e., that the Book of Mormon was written by their fathers and was a record of their ancestors.

I still hope the Church History Museum corrects this display and includes the language from the scriptures instead of the Mesomania-inspired commentary.