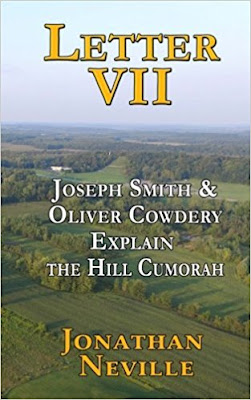 I'm giving readers of the blog a preview of a new version of Letter VII that will be released in 2018. The new subtitle is "Joseph Smith and Oliver Cowdery Explain the Hill Cumorah."

This version incorporates some new research and feedback.

While Oliver wrote and signed the letters, Joseph helped him and had his scribes copy the letters into his own journal as part of his life story. The letters are not formally considered "Joseph Smith Documents" because he didn't write them per se, but he wrote very little himself. These letters are so closely related to Joseph, and endorsed by him on multiple occasions, that I thought the new subtitle is was more accurate.

Also, as I've mentioned before, when Joseph ordained Oliver as Assistant President of the Church in December, 1834, he explained the calling included the role of spokesman. That's why Oliver was the one who ordained the first Twelve Apostles and gave them their Apostolic Charge. It was in that role, as Assistant President of the Church, member of the First Presidency, and spokesman, that Oliver wrote Letter VII.

You can see the new version here at this link.

Until Christmas, it's on a promotional price of $5.99 on Amazon.