Lessons from the British Mission

Modern missionary work could learn some important lessons from the British Mission in the 1830s and 1840s.

Then, as today, the Book of Mormon is the key to conversion. It's the instrument the Lord prepared to gather scattered Israel.

The missionaries in England in the 1830s and 1840s encouraged investigators to consider physical evidence as well as to pray about the truthfulness of the Book of Mormon.

Today, missionaries are told not to discuss, or even mention, physical evidence for the Book of Mormon. Investigators and the missionaries themselves are left wondering where all of these events took place.

Most investigators check the Internet. There, they learn four things:

1. DNA "disproves" the Book of Mormon (and the Gospel Topics DNA essay has little persuasive effect as a counter to the critics).

2. LDS scholars say the prophets and apostles have been wrong when they have taught that Cumorah is in New York.

3. LDS scholars generally agree the events occurred in Mesoamerica but strongly disagree about exactly where.

4. Non-LDS scholars see zero connection between the Book of Mormon and Mesoamerican civilizations.

Contrast this state of affairs with what the early Apostles did when they went to England.

Among other things, Parley P. Pratt published Oliver's historical letters in the Millennial Star, beginning with his second issue in June 1840. He published Letter VII in October 1840.

Not only was it a definite fact that Cumorah, the scene of the final battles, was in New York, but Pratt also editorialized about additional physical evidence. He explained, "If any further proof of the truth of the Book of Mormon were wanting than the spirit of inspiration and truth which is breathed into the soul of every honest man as he reads the blessed volume, he might easily find it in the ruins of cities, towns, military roads, forts, fortifications, mounds, artificial caves, temples, statues, monuments, obelisks, hieroglyphics, sculptured altars, aqueducts, and an endless variety of articles of husbandry, cooking utensils..."

Pratt mentioned physical evidence throughout North and South America. In our day, we have more detailed knowledge of these civilizations, including their DNA, and we see that what the Lord told us in D&C 28, 30, and 32--that the descendants of Lehi are the Indians living in New York, Ohio, and Missouri (where they had been relocated from the East)--fits the descriptions in the text in terms of anthropology, archaeology, geology and geography.
_____

Now, let's compare the results of the two approaches to missionary work.

Brigham Young reported when he left in April 1841,

"We landed in the spring of 1840, as strangers in a strange land and penniless, but through the mercy of God we have gained many friends, established churches in almost every noted town and city in the kingdom of Great Britain, baptized between seven and eight thousand, printed 5,000 Books of Mormon, 3,000 Hymn Books, 2,500 [copies] of the Millennial Star, and 50,000 tracts, and emigrated to Zion 1,000 souls."

Assuming his numbers were correct, 7,000-8,000 converts in a year when there were only about 16,000 members total means nearly one convert per every two members. In terms of converts as a percentage of membership, this is 50%.

It means more than one convert per copy of the Book of Mormon printed.

Today, there are over 150 million copies of the Book of Mormon in print. There are nearly 16 million members, with around 300,000 converts per year. The chart below, from roundelmike.com, is the conversion rate for the last few years, where it has declined from less than 5% to less than 2%. 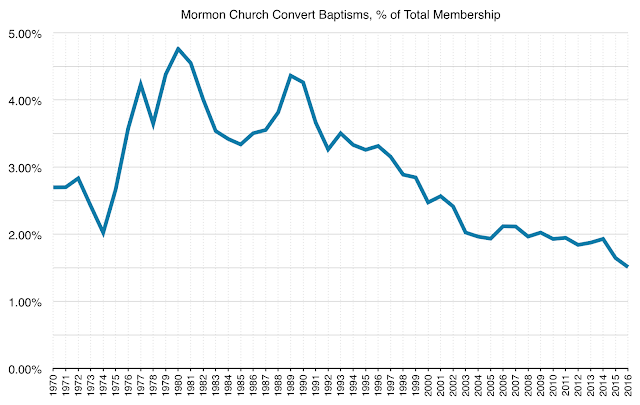 Obviously, when you have a smaller base, it's easier to grow at a rapid rate. We can't expect the success of the British Mission to continue today. We all know the challenges are different, etc.

Some things haven't changed. As in the British Mission, today's missionaries tell people to read the book, live the teachings, and pray about it.

But unlike today, the missionaries in the British Mission were not going around telling people there was no evidence of the Book of Mormon.

And unlike today, the missionaries in the British Mission were not being taught before they left that the prophets and apostles were wrong about Cumorah in New York.

Instead, the British missionaries published and taught Letter VII. They encouraged people to consider the physical evidence.

And despite tremendous opposition, the missionaries in the British Mission succeeded in converting thousands of people, more than one for every Book of Mormon printed.

Printing numbers are irrelevant today when most people use electronic versions, but since more than 150 million physical copies of the Book of Mormon have been printed, a success rate comparable to the British Mission would have converted well over 150 million people.

Which is about what we should expect, given that we have the truth.

We all know there are myriad differences between 1840 England and the modern world in 2017, but those differences cut both ways. People may be more worldly and less religious, but communications are easier and there is far less opposition. Missionaries are free to travel and teach in most of the world, and the Internet gives additional access beyond that.

In fact, if the modern world is less religious and more skeptical than 1840 England, that's all the more reason to offer more evidence, not less.

We could start with a simple step.

Why not have missionaries teach the words of the prophets and apostles about Cumorah in New York?

We may not have specific answers for the rest of the geography, but we have that pin in the map that takes the Book of Mormon out of the realm of mystical fiction, where it exists today in the minds of most of the world (and even in the minds of many members of the Church, especially those being taught an "abstract" fantasy map at BYU).

Once we as members reach unity by believing the words of the prophets on the Cumorah issue, then we can work on the rest of the physical evidence.

Maybe, having exercised faith in the words of the prophets, we'll be in a position for the Lord to assist us (a topic for another day).

Now, here is the background on the British Mission.
_____ 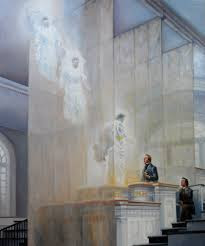 After the keys of the gathering of Israel were restored to the earth to Joseph Smith and Oliver Cowdery in the Kirtland temple (D&C 110), Joseph sent Parley P. Pratt to Toronto, promising that his work there would "lead to the introduction of the gospel into England." Among his converts were John Taylor and Joseph Fielding. In 1837, Joseph sent Heber C. Kimball and Orson Hyde to England. They returned home in April 1838, having converted about 1,500 people in England.

In Far West in April 1838, Joseph received a revelation that the twelve should return to England (D&C 118). Here's a summary of their work from the Encyclopedia of Mormonism:

Departing in conditions of poverty and illness and trusting in the promises of God that all would be well with them and their families, most of the members of the Twelve made their way in various groups to Liverpool. By April 1840, they were together for the first time as a quorum in a foreign land. On April 14, 1840, in Preston, they ordained Willard Richards an apostle and sustained Brigham Young as "standing president" of their quorum. They held a general conference the next day in which they conducted Church business and further organized the mission. On the 16th they met again as a quorum and further planned their work. On the next day, they separated to various assigned geographical areas: Brigham Young and Willard Richards were to assist Wilford Woodruff with the work he had already begun among the United Brethren in Herefordshire; Heber C. Kimball was to return to the areas of his 1837-1838 missionary successes; Parley P. Pratt was to establish a mission home and publishing concern in Manchester; Orson Pratt was assigned to Scotland, where the work had already begun; John Taylor was to go to Liverpool, Ireland, and the Isle of Man; and George A. Smith was assigned to the area of the Staffordshire potteries. In time, Wilford Woodruff and George A. Smith would extend their work to London.

As a result of this mission, an additional 4,000 converts joined the Church by 1841.

I bolded Parley Pratt because he started the Millennial Star. The first issue was published in May 1840. Beginning with the second issue, Elder Pratt reprinted Oliver's eight historical letters as a continuing series under the title "A Remarkable Vision."

Letter VII was published in volume 6, October 1840. We can't tell how much of a role the letters played in the success of the mission, but popular demand for the letters led to them being printed in a special pamphlet in 1844. The introduction says, "We have frequently been solicited to publish, in pamphlet form, the following letters of Oliver Cowdery..." Thousands of copies were printed.

You can read the pamphlet here.

You can read the Millennial Star on google books here.

It's interesting that Elder Pratt offered evidence to support the Book of Mormon. In addition to Oliver's letters, he made comments such as this one on p. 117, after quoting 3 Nephi 10.

If any further proof of the truth of the Book of Mormon were wanting than the spirit of inspiration and truth which is breathed into the soul of every honest man as he reads the blessed volume, he might easily find it in the ruins of cities, towns, military roads, forts, fortifications, mounds, artificial caves, temples, statues, monuments, obelisks, hieroglyphics, sculptured altars, aqueducts, and an endless variety of articles of husbandry, cooking utensils, &c. &c. which are the product of some ancient race, who inhabited that land, and who had risen to a high state of refinement in the arts and sciences, as the relics of their labours prove—as they now lie scattered over a vast extent of North and South America, either on the surface, or buried beneath by the convulsions of nature, or the visitations of the Most High, as recorded in the fore-going extract; and which are frequently discovered and brought to light by antiquarian travellers.

Pratt followed those comments with an article about the travels of Stephens and Catherwood in Central America. Then he wrote, "For further testimony and proof positive of the Book of Mormon, we copy the following [the Testimony of Three Witnesses].

My take on all of this is that Elder Pratt accepted and endorsed Oliver's letters, including Letter VII. There was no question that Cumorah was in New York. Pratt suggested that ruins through the entire Western hemisphere were evidence to support the Book of Mormon, but he proposed it in a generalized way.

There is a definite contrast between the specificity of Letter VII, based as it was on the personal experience of Joseph and Oliver in Mormon's depository of Nephite records, and the generalized claim that evidence of advanced civilizations in ancient North and South America. Here are some of the excerpts from Letter VII as published in the 1840 Millennial Star. 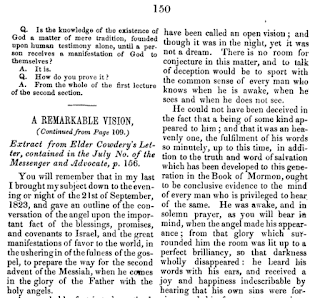 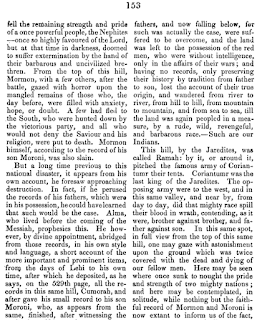