Confusion about the golden plates

Yesterday I commented on The Book of Mormon Study Guide: Start to Finish.

Today I'm going through the comments on the Title Page and the plates to show how mistakes in Church history have been perpetuated for so long.

Pages 5-6 cover this topic: Title Page of the Book of Mormon.

Did Joseph Smith write the Title Page? The Prophet Joseph Smith said, "I wish to mention here that the title-page of the Book of Mormon is a literal translation, taken from the very last leaf, on the left hand side of the collection or book of plates, which contained the record which has been translated, the language of the whole running the same as all Hebrew writing in general [that is, from right to left]; and that said title page is not by any means a modern composition, either of mine or of any other man who has lived or does live in this generation" (Joseph Smith [manual], 60-61).

You can see the manual here.

Two comments. First, our scholars are perplexed by this statement because they are teaching us that Joseph didn't actually use the plates when he translated. At BYU Education Week a few months ago, in a class on Church history, the instructor said "we don't know how Joseph knew the title page was on the last leaf because he didn't use the plates. They were under a cloth when he was looking at the stone in the hat." This same narrative is displayed in the new Church movies about Harmony and Fayette. That's another topic, but I mention it here because people should be aware of what's going on.

[Note: the manual itself omits part of Joseph's original statement "Therefore, in order to correct an error which generally exists concerning it, I give...]

I think this is significant because the phrase "original Book of Mormon" has two connotations. First, it refers to the original writings on the plates; i.e., the work of Mormon and Moroni.

1. Abridgment of the record of the people of Nephi, and also of the Lamanites;

2. Abridgment taken from the Book of Ether;

3. Sealed by the hand of Moroni (Moroni's original writings)

The Title Page says nothing about any original plates; i.e., no plates of Nephi were included in the original Book of Mormon.

Because the Title Page was the "very last leaf," we can be sure that Moroni knew what they contained. He didn't add the plates of Nephi to the collection after the Title Page.

That's because the plates of Nephi were not in the original Book of Mormon.
_____

The Study Guide includes this explanation of the plates on page 13:

Why are we told about the different metal record plates comprising the Book of Mormon? "The Book of Mormon is a complex text with a complicated history. It is primarily an abridgment of several earlier records by its chief editor and namesake, Mormon. All these records are referred to as "plates" because they were engraved on thin sheets of metal. Various source documents were used by Mormon in his compilation, leading to abrupt transitions and chronological disjunctions that can confuse readers. However, when one is aware of the history of the text, these are consistent and make good sense." (Ludlow, Encyclopedia of Mormonism, 1:195)

[Actually, this is from an article by Grant R. Hardy that you can read here:
http://eom.byu.edu/index.php/Book_of_Mormon_Plates_and_Records]

I like this quotation a lot because of the last line. There are persistent problems in Church history that the traditional explanations don't resolve. Not just the Title Page problem, but the different descriptions of the plates, the messenger taking the Harmony plates to Cumorah before going to Fayette, etc. We can paraphrase Brother Hardy's last line above and say, "When one is aware of the two sets of plates, the accounts in Church history are consistent and make good sense."

The Study Guide proceeds with an explanation of the small plates, quoted from Largey's Book of Mormon Reference Companion that I discussed a few days ago. Then there are several more quotations from the Encyclopedia of Mormonism, leading up to this graphic on page 15, taken from Church manuals, including the 2017 Book of Mormon Seminary Teacher Manual, which you can see here: https://www.lds.org/manual/book-of-mormon-seminary-teacher-manual-2017/appendix/the-plates-and-their-relationship-to-the-published-book-of-mormon?lang=eng 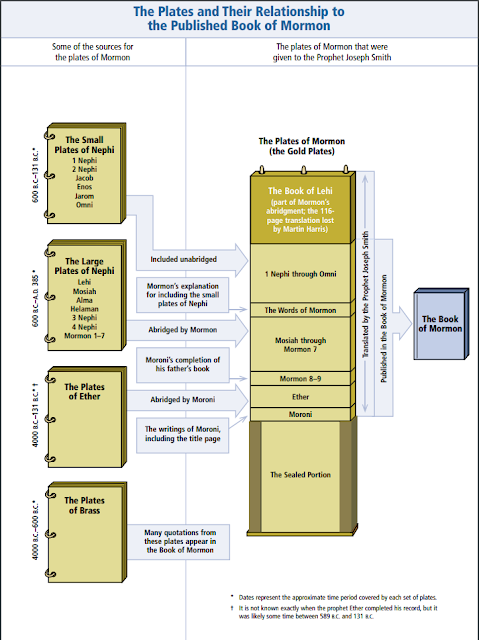 It's a nice graphic but it unmistakably demonstrates that the "small plates of Nephi" could not have been included in the set of plates that Moroni put in his stone box.

Mormon put the small plates with the other plates when he was working on his abridgment. He didn't punch holes in them and attach them to the plates he gave Moroni. They were not an abridgment of the record of the Nephites; they were original records.

This is why the Lord told Oliver in D&C 9 that he had other records Oliver would assist to translate. In D&C 10 he told Joseph and Oliver what these other records were; i.e., the plates of Nephi.

This is why, before he left Harmony, Joseph gave the plates to a divine messenger who took them to Cumorah. Joseph was finished with those plates. He had translated all of them (except the sealed portion).

When Joseph arrived in Fayette, the messenger gave him the small plates he had picked up from Mormon's depository in Cumorah. That's why Joseph translated 1 Nephi through Words of Mormon in Fayette.

I've discussed all of this at length in Whatever Happened to the Golden Plates? There is far too much detail to go through on this blog, but I put the basic diagram here.

I think it's important that Church historians not ignore or dismiss the accounts related by Joseph and his associates. The traditional interpretation, as depicted by the graphic above, doesn't make sense and doesn't explain the other historical accounts.
Posted by jonathan3d at 7:30 AM