A recurring question is how much of the Mesoamerican/two-Cumorahs propaganda is a result of intention and how much is a product of ignorance (and imprinting). 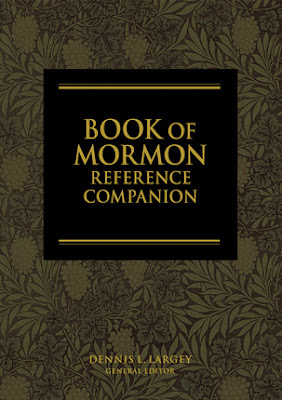 For example, look at the book Book of Mormon Reference Companion. It is available at Deseret Book for $50.99.

The General Editor is Dennis L. Largey, a professor of Ancient Scripture at BYU since 1985.
https://religion.byu.edu/dennis_largey

Here is his bio, from the Deseret Book page:

Dennis L. Largey, also general editor of the Book of Mormon Reference Companion and the Doctrine and Covenants Reference Companion, is a professor of ancient scripture at Brigham Young University and former chair of the department of Ancient Scripture. He has served in the educational system of The Church of Jesus Christ of Latter-day saints for more than thirty-five years. Brother Largey joined the Religious Education faculty at BYU in 1985. His Church service includes counselor in two stake presidencies, bishop, branch president at the Missionary Training Center in Provo, Utah, and member of the Church’s Materials Evaluation Committee.

We would expect Brother Largey to provide a fairly comprehensive and accurate reference book. This is 850 pages, published by Deseret Book, by a former chair of the department of Ancient Scripture at BYU. Associate Editors of the book include Marilyn Arnold, Terry B. Ball, Larry E. Dahl, Donald W. Parry, David R. Seely, and Clyde J. Williams.

But look at what the "Reference Companion" says about the Hill Cumorah, on page 223:

"Some modern scholars believe there are two Cumorahs, one in Central America where the final battle between the Nephites and Lamanites took place and where Mormon hid all the records, and a second hill in New York State where the gold plates were deposited by Moroni and where Joseph Smith received them from the angel Moroni (Palmer, 346-47)."

The so-called "Reference Companion" never once mentions the single most detailed description of Cumorah that we have in the Church; i.e., Letter VII, which was published in 1835. No wonder "Cumorah seemed to be well-known" in 1835: in Letter VII, the "New York hill" was specifically identified by the First Presidency as the site of the final battles of the Jaredites and Nephites, as well as Mormon's depository (Mormon 6:6). Joseph Smith made sure all Church members in his day knew about Cumorah by having Letter VII reprinted in every official Church newspaper, as well as private newspapers owned by Church members.

No one reading this "Reference Companion" would learn anything about Letter VII.

To be sure, the entry on Cumorah does mention that Joseph found the plates there. On page 222 it includes this: "Brigham Young reported that when Joseph returned the plates, 'the hill opened, and they walked into a ... large and spacious room... [containing] more plates than probably many wagon loads' (Young, 19:38)."

But the scholars explain this away as a "vision" of a hill in Mexico. The book doesn't provide the numerous other accounts that corroborate what Brigham said. Instead, it gives the views of the scholars without once mentioning Letter VII.

It's difficult to imagine that Brother Largey and the other editors and contributors are ignorant of Letter VII. After all, they specifically referred to 1835, the year when Letter VII was published.

They made a conscious decision to omit it.
_____

If there's any lingering question about intention vs ignorance, look at an additional edit made in the "Reference Companion." Right after giving us the views of "modern scholars," the book tells us this:

"Just when this New York hill was first called Cumorah is difficult to determine, but by 1835 the name Cumorah seemed to be well-known, at least among Church members. Joseph Smith referred to the hill but only used the name Cumorah once in his personal writings: 'Glad tidings from Cumorah!' (D&C 128:20)."

On page 11 of the "Reference Companion" we read this:

Joseph replied, "I have taken the severest chastisement that I have ever had in my life." Father Smith, surmising that the mob element in the area was harassing his son, retorted, "I would like to know what business anybody has to find fault with you!" Joseph countered, "Stop, father, stop, it was the angel of the Lord." The angelic messenger told him that he "had not been engaged enough in the work of the Lord; that the time had come for the record to be brought forth; and that [he] must be up and doing and set [himself] about the things which God had commanded [him] to do" (Smith, Joseph, 100)."

Now, look at the original source and see how carefully Brother Largey edited out the early reference to Cumorah. The omitted part of the quotation is in red below.

Presently he smiled, and said in a very calm tone, “I have taken the severest chastisement, that I have ever had in my life”. My husband, supposing it was from some of the neighbors, was quite angry; and observed, “I would would like to know what business any body has to find fault with you.”
“Stop, father, Stop.” said Joseph, “it was the angel of the Lord— as I passed by the hill of Cumorah, where the plates are, the angel of the Lord met me and said, that I had not been engaged enough in the work of the Lord; that the time had come for the record to <be> brought forth; and, that I must be up and doing, and set myself about the things which God had commanded me to do:"

If you read about Church history and the Book of Mormon in publications written by BYU professors, published by Deseret Book, you need to be aware that you are getting material that has been carefully scrutinized and edited to promote the Mesoamerican/two-Cumorahs theory.
___

Here's one more example. The "Reference Companion" cites Lucy Mack Smith's book, History of Joseph Smith, but doesn't tell readers that according to Lucy, Moroni identified the hill as Cumorah before Joseph even obtained the plates. "There is a record for you, Joseph, but you cannot get it until you learn to keep the commandments of God, for it is not to get gain, but it is to bring forth that light and intelligence which has been long lost in the earth. Now, Joseph, beware or when you go to get the plates, your mind will be filled with darkness and all manner of evil will rush into your mind to prevent you from keeping the commandments of God. You must tell your father of this, for he will believe every word you say. The record is on a side of the hill of Cumorah, three miles from this place. Remove the grass and moss, and you will find the record under it, lying on four pillars of cement."