If you're a student at BYU or in CES, your teachers are using a fantasy map to teach you about the Book of Mormon. Here's the link: http://bom.byu.edu/

I think this is a disastrous development. It is the penultimate step toward the inevitable destination, the last stop on the road of rejecting what the prophets and apostles have taught about Cumorah. The final stop will be declaring that the Book of Mormon is a "righteous parable," a euphemism for calling it fiction. We can expect that next, within a few years, unless people change course and revert to what the prophets and apostles have consistently taught for over 150 years, beginning with Letter VII.

Joseph knew Cumorah was in New York before he even got the plates in 1827. But in terms of official publications, Letter VII was the first to specify, without hesitation or equivocation, that the hill Cumorah in New York was not only the place where Moroni buried the plates, but also the site of Mormon's depository and the scene of the final battles of the Jaredites and Nephites.

For those new to the blog, Letter VII was written by President Oliver Cowdery in 1835. He was Assistant President of the Church, making him the senior member of the First Presidency after Joseph Smith. Letter VII was published in the official Church newspaper, the Messenger and Advocate, and, at Joseph's direction and with his approval, it was republished in many other Church publications, including the Millennial Star, the Times and Seasons, the Prophet, and the Improvement Era. You can read it right now in Joseph Smith's own History, 1834-1836, at this link:
http://www.josephsmithpapers.org/paper-summary/history-1834-1836/90

The New York Cumorah has been taught repeatedly and consistently, including by members of the First Presidency in General Conference, and has never been changed by any Church leaders. But your BYU/CES teachers will tell you it is false because, according to some LDS intellectuals, Cumorah is actually in Central America.

BTW, you don't have to rely on BYU for your fantasy map. You can create your own fantasy maps on several web pages. 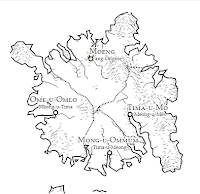 Here's one I created from this site: https://mewo2.com/notes/terrain/

You can experiment with different settings and come up with lots of fantasy maps that could fit the M2C (Mesoamerican/two-Cumorahs) interpretation of the Book of Mormon.

This site generates islands, but you can construe the text to make it work. 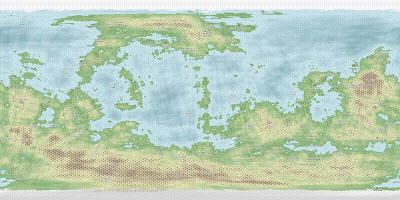 Another site,
http://donjon.bin.sh/fantasy/world/,  generates bigger maps that are probably more useful because there are many options for a "narrow neck" when you follow the Mesoamerican methodology and conflate the different terms, assume there are lots of mountains and volcanoes, etc.


Just look at how many fantasy places you could place the Book of Mormon once you untether it from the prophets and apostles!

How did we get to the point where BYU is teaching students that the Book of Mormon events happened in a fantasy world?

The genealogy of this fantasy map is a topic for another post, but in short, some LDS intellectuals decided we should disbelieve the prophets and apostles about Cumorah. Instead, we should follow them, the intellectuals, wherever they lead. They decided among themselves that the Book of Mormon actually took place in Central America (Mesoamerica), so they concocted an interpretation of the text that fit Central America.

Then they announced that all the prophets and apostles, from Joseph Smith and Oliver Cowdery on, were merely expressing their opinions about Cumorah in New York. And they were wrong.

At some point, BYU told them to stop teaching a specific geography in Mesoamerica. Fine, they said. They decided to apply the Mesoamerican interpretation of the text to create an "abstract" map, which is the fantasy map depicted above.

Look where they put Cumorah:
This is just about as far from western New York as it is possible to imagine, short of putting it on the moon.

This map is a flat-out repudiation of the prophets and apostles.

And BYU teaches it proudly. They encourage seminary and institute teachers to use it. They want it available to everyone in the Church.

Let's look at how BYU explains this map. The explanation is on this web page: http://bom.byu.edu/

My comments in red.

The Church and BYU stay neutral in questions of exactly where the Book of Mormon took place. I hear this statement often, but I don't know where it comes from. Certainly the artwork in every chapel and visitors center portrays the Mesoamerican setting. The North Visitors Center on Temple Square teaches M2C, with Mormon's depository in Mesoamerica and Moroni far away in New York burying the plates. The displays never quote the statements from apostles and prophets about the New York Cumorah.

I suppose it's accurate to say "the Church" isn't teaching what these paintings and visitors centers are teaching.

In terms of official publications, the New York Cumorah has not only been repeatedly taught, even in General Conference, but no alternative Cumorahs have ever been taught or even alluded to in those forums.

Consequently, I ascribe the artwork and visitors centers to the staff people who have been indoctrinated at BYU/CES into thinking M2C.

But BYU is a different story. It is anything but neutral to put Cumorah in a fantasy land, especially a fantasy land defined by the M2C interpretation of the text.

Furthermore, BYU Studies is the exact opposite of neutral. It is all-in on M2C, from its home page through its editorial content.

The repudiation of the New York Cumorah is free license to reject anything the prophets and apostles teach if we happen to disagree because of our area of expertise.

For that reason, our design team has chosen to develop an internal map that shows relational directions and approximate distances that match the approximately 550 geography descriptions in the text as closely as possible. Obviously, these are entirely subjective judgments. But think about the implications of this statement. If true--if the fantasy map matches the text "as closely as possible" as this statement claims--what does that say about the authenticity of the Book of Mormon?

Because these intellectuals are confusing their own subjective interpretations with objective reality, they are teaching us that the Book of Mormon fits best in a fantasy world.

The inherently vague descriptions in the text accommodate many interpretations, but all these interpretations are nothing more than exercises in bias confirmation. This presents us with the choice between two biases.

1. We are biased in favor of what the prophets and apostles have taught about Cumorah in New York and figure out how the text corroborates that teaching.

2. We are biased against what the prophets and apostles have taught and figure out how the text describes anything but Cumorah in New York.

The BYU fantasy map reflects the second bias, based on the M2C procedure.

Step 3: fix the many problems with the M2C interpretation by creating a fantasy world.

These are artistic renditions. Fair enough. So are the many web-based fantasy map generators.
_____

The obvious problem with a fantasy map is the inherent subjectivity of the interpretations.

BYU professors resolved that by simply adopting the Mesoamerican interpretation, such as the semi-official one that has appeared on the home page of BYU Studies for years:
https://byustudies.byu.edu/charts/160-plausible-locations-mesoamerica-book-mormon-places

You might wonder, how is the BYU fantasy map the same as the BYU Studies map?

BYU simply rotated it 90 degrees and made the "narrow neck" even narrower. The reason, of course, is that the BYU Studies map never made sense. They had to re-define "north" to mean "west" and "narrow neck" to mean "a little narrower than the rest of the land."

BYU professors "fixed" these problems with their fantasy map, but it is based on the exact same interpretation of the text.

When it gets down to it, fantasy and Mesoamerica are really the same thing; a rejection of the prophets and apostles.

For Cumorah, BYU Studies is even more specific.

You can see it at this link: https://byustudies.byu.edu/charts/159-plausible-locations-final-battles

Just for fun, imagine a group of LDS scholars hiking through the jungles of Mesoamerica looking for the "real" Hill Cumorah. It sounds absurd, doesn't it?

But it's reality. You can see a presentation on an expedition to Mesoamerica looking for Cumorah here: https://www.youtube.com/watch?v=nKwEeaQ_7gE
_____

If the point wasn't already clear, the bottom of the BYU web page depicts the stark difference between fantasy and reality:
I think it's cheating to use a real-world map of the Middle East. If BYU is going to reject the New York Cumorah as the starting place, they should reject Jerusalem as the starting place, too. Let's see what kind of "abstract" map they would construct based on the descriptions in 1 Nephi.

One thing for sure, it would look nothing like the real world.

BYU's latest effort to repudiate the New York Cumorah is appalling to me, precisely because of this stark contrast between real and fantasy worlds. I think the Book of Mormon describes North America very well.

If we start with Cumorah in New York and apply the descriptions to real-world geography, geology, anthropology and archaeology, we get a map that fits nicely and is consistent with all the teachings of the prophets and apostles (including the presence of Lehi's posterity in Latin America, which is the hinterlands of the Book of Mormon text).

I explained all of this in Moroni's America. There are lots of free maps you can look at on my web page, here: http://www.moronisamerica.com/maps/.

The M2C intellectuals disagree because they are so deeply invested in M2C that they "can't unsee Mesoamerica" when they read the text. But they're not reading the same text the rest of us are.

Their version of the Book of Mormon describes volcanoes, the 3 Ms (Mayans, mountains, massive stone temples), and the three Js (jungles, jaguars, and jade).

The BYU fantasy map incorporates the M2C interpretation. It is being imprinted on students throughout the Church.

It doesn't take much imagination to see where that will lead.