Getting real about Cumorah - Part 4b, what should happen at BYU

This is part 4b in the series on "Getting real about Cumorah."  Part 4 looks at a few of the things that would happen if we all decided to get real about Cumorah and reject the entire M2C narrative (M2C stands for Mesoamerican/two-Cumorahs theory).

Today we'll look at BYU itself.

There is one simple change that would solve the problems caused by M2C: make President Cowdery's eight historical letters required reading for all BYU students in Book of Mormon and Church History classes.

I say this not only because the Saints in Joseph Smith's day were all familiar with these letters, although that's an important point as well. These letters should be required reading because familiarity with them is critical for both Church History and Book of Mormon studies.

President Cowdery's letters, including Letter VII, were part of the "cultural literacy" of early members of the Church. If you were a member of the Church between 1835 and 1845, you would have been familiar with these important letters. These letters are part of the lens through which we should read and understand Church history as well as the Book of Mormon.

The letters were published in all the Church magazines: Messenger and Advocate (Kirtland), Millennial Star (England), Gospel Reflector (Philadelphia), Times and Seasons (Nauvoo), and The Prophet (New York City). Portions were translated into German, Dutch, and French. Thousands of copies were printed as a separate pamphlet in England.

The letters were not only the principal account of the critical historical events of the Restoration available during Joseph's lifetime, but they also addressed important issues of the times that remain relevant today. President Cowdery addressed anti-Mormon attacks, explored reasons why people accept or reject the gospel, explained that prophets and apostles are inspired--but not perfect--people, and provided a real-world context for the Book of Mormon and the plates from which it was translated.

Joseph didn't need to cite Letter VII, any more than Shakespeare had to cite chapter and verse for his biblical allusions. Joseph knew readers were fully aware that Cumorah is in New York because they had read Letter VII. It was part of the common understanding of the Saints in his day.

But instead of teaching these historical letters at BYU, the faculty seeks to suppress them. If a student asks about them, faculty respond that the letters are just "Oliver Cowdery's opinion," that they are wrong and that they shouldn't be read.

Because they contain Letter VII, and Letter VII contradicts the M2C narrative that so many intellectuals in the Church, including BYU professors, continue to promote
_____
One of the most obvious improvements we'd see at BYU is the elimination of the fantasy map of Book of Mormon geography that imprints a Mesoamerican setting on the minds of the students.

I won't belabor that here, since I addressed it recently here:

In my view, this fantasy map is the modern equivalent of Mormonism Unvailed, the 1835 anti-Mormon book that also taught the Book of Mormon was fictional.

Teaching Letter VII today would accomplish the same objective President Cowdery had in 1835; i.e., it would place the Book of Mormon firmly in the real world, taking it out of the realm of myth or fiction.

Obviously, knowing that there is one Hill Cumorah and it is in New York doesn't solve or even address the rest of Book of Mormon geography. Contemporaries of Joseph and Oliver, who all accepted their teaching about Cumorah in New York, nevertheless speculated wildly about the location of Zarahemla, Lehi's landing site, etc. (We'll discuss why that happened in a later installment in this series.)

But having one pin in the map--the New York Cumorah--informs our study of the historicity of the Book of Mormon. Bright, faithful students, unencumbered with the imprinted M2C interpretation of the text, could develop possible scenarios that would support, instead of repudiate, the teachings of the prophets and apostles.
_____

The two departments at BYU that would modify their courses if BYU decided to get real about Cumorah are The Department of Ancient Scripture and the Department of Church History and Doctrine.

At the end of this post I list the departments and their course offerings, from this link:
https://catalog.byu.edu/courses?cd=11

While we're on this topic, the quality and extent of Book of Mormon studies was criticized by a BYU Professor a few years ago. His piece is titled "How BYU Destroyed Ancient Book of Mormon Studies."

You can read that here: http://www.patheos.com/blogs/enigmaticmirror/2015/09/08/how-byu-destroyed-ancient-book-of-mormon-studies/#disqus_thread

I agree with his point that Book of Mormon studies at BYU are anemic, but not with his focus on M2C. Just have students and faculty learn Letter VII and see what happens when they learn how archaeology, anthropology, geology and geography vindicate the teachings of the prophets.
_____

BYU offers three 2-hour courses on the Book of Mormon:

REL A 121 - The Book of Mormon
REL A 122 - The Book of Mormon
REL A 275 - Teachings and Doctrine of the Book of Mormon
The first two are required classes. This means you can graduate from BYU having taken only 4 semester hours of coursework on the Book of Mormon. That means attending a 50-minute class twice a week for a total of 30 weeks (15 weeks per semester), which makes 60 class periods.
This is a little more than studying the Book of Mormon in Sunday School for a year (48 class periods/year). Compare that against the 160 lessons in the Seminary manual (see the manual here). Rel A 275 is essentially the Institute class (see the manual here). You can read the expected learning outcomes here:
https://learningoutcomes.byu.edu/Instructors/course-instructors/04997/050/REL+A+121/zSiswi/1019
These classes are wonderful and achieve their purpose. In addition, faculty throughout BYU incorporate the scriptures, including the Book of Mormon, into their secular classes whenever possible. We're not training ministers, after all.
But we are training lay leaders.
Which is all the more reason to educate and prepare them at BYU to address issues of conversion, retention, and activity that they will face their entire lives.
Last May I posted a discussion titled "Perspectives, inside and outside."
http://bookofmormonwars.blogspot.com/2017/05/perspectives-inside-and-outside.html
There, I observed that people who have left the Church (as well as nonmembers) have objections that include these: "Book of Mormon not ancient," "Church lies about its history," "Prophet never speaks prophetically," and so on.
Consider those issues in light of what's going on at BYU.
Using a fantasy map to teach the Book of Mormon--especially declaring it is the best fit to the text--cements the idea that the Book of Mormon did not take place in the real world, which of course also means it is not ancient.
Suppressing and denigrating President Cowdery's letters, along with the teachings of other prophets and apostles about the New York Cumorah, cements the idea that the Church lies about its history and that prophets don't speak prophetically.
IOW, BYU is currently teaching students exactly those ideas that the former Mormons and nonmembers cite as justifications for their rejection of the Church.
Ironically, these are all issues that President Cowdery specifically addressed in his letters. Students who study Letter II, for example, understand that prophets are not perfect men and never have been. Students who study Letter VII learn the depth of the temptations Joseph struggled with before he took possession of the plates. Moroni's teachings about the Old Testament are invaluable for understanding the Restoration in the context of ancient prophecy. And, of course, Letters VII and VIII establish the real-world reality of the Book of Mormon and the New York Cumorah.
_____
While we're discussing curriculum, look at Lesson 2 in the Institute manual for the Book of Mormon:

In case you can't read it, the Introduction says "The Book of Mormon teaches that those who heed these prophets are blessed, while those who oppose them
experience regret and sorrow."

And yet, the same BYU professors who teach this principle are the ones telling the students that the prophets and apostles were wrong when they taught that there is one Hill Cumorah and it is in New York. 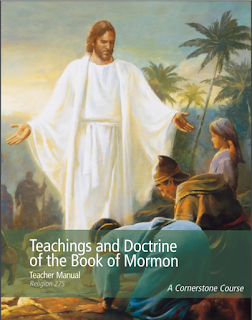 Now, look at the cover of the manual. It's a wonderful painting, of course, but what is it teaching?

The debate over Cumorah boils down to palm trees vs pine trees. This painting chooses palm trees, imprinting that idea on the students.

I'm not saying Christ visited the Hill Cumorah, but this painting does convey a specific geographic area; i.e., Central America.

(Okay, it could be Florida or maybe California, but it's definitely not the Midwestern United States, which means it's not neutral on the geography question.)

Do you see why students are confused? Do you see the fulfillment of Joseph Fielding Smith's prophetic warning that M2C would cause members to become confused and disturbed in their faith in the Book of Mormon?
_____

On the topic of curriculum, I'll address the Seminary/Institute issues in a subsequent installment.

For this post, I just want to reiterate that it's time to take Cumorah seriously, and to accomplish that at BYU, President Cowdery's letters ought to be part of the curriculum of Church History and the Book of Mormon.