Due to popular demand, we have released a larger-print version of the Letter VII book. Many people prefer a larger font for easier reading.

The large font is available on Amazon here.

The smaller font is on Amazon here.

Some people are printing the 3-page Letter VII summary and including it with the book when they share the book with friends and family. You can get the summary here:
http://www.lettervii.com/2018/01/printable-summary-of-letter-vii.html 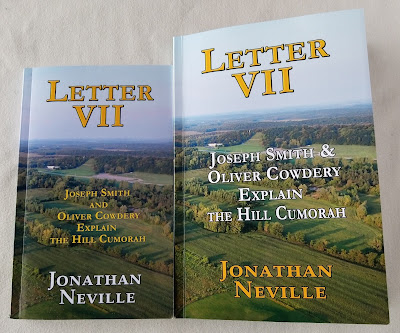 Joseph referred to these as "President Cowdery's letters," a title many modern intellectuals have forgotten or refuse to acknowledge. They continue to insist that Letter VII's teaching about Cumorah was wrong. Worse, these intellectuals say Joseph and Oliver promoted a false theory that misled the Church.

This is what students are being told in BYU Book of Mormon classes if they dare ask their professors about Letter VII.

In fact, they promote this fantasy map with the tagline "Discover the Book of Mormon like you've never seen it before."

That's because this is the first time that BYU (and, apparently, CES) have taught students that the Book of Mormon took place in a fantasy world.
_____

When President Cowdery wrote and published Letter VII, he was the Assistant President of the Church, making him second only to Joseph Smith and higher in seniority than the First and Second Counselors in the First Presidency. Hyrum Smith later held this same calling, but after he was murdered in Carthage with his brother Joseph, no one else has held the calling of Assistant President of the Church.
Posted by jonathan3d at 10:52 AM