In defense of scribes and Pharisees 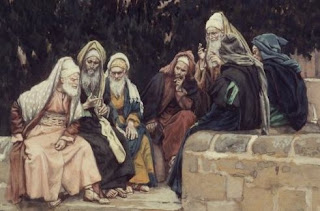 In the New Testament, the Jewish scribes and Pharisees are portrayed negatively, to say the least.

But does that mean they had bad intentions? Were they trying to do the wrong thing, to subvert their own religion, to defy God?

They had been trained from their youth to study the scriptures and strictly adhere to the law, as they understood it.

They "searched the scriptures," not realizing that they testified of the very Christ who lived among them. Their study kept them from recognizing Christ because the interpretations they had learned their whole lives were deeply imprinted on their minds.

They could not "unsee" their own ideas of what Christ would be like. They had expectations, based on the scriptures. There was a scholarly consensus.

They couldn't be wrong.

They were the experts.

The PhDs of their day.

And they convinced themselves they were doing the right thing because they had developed their consensus from the text itself.

Can we blame them for following the traditions of their fathers (and their teachers)?
_____

We have a similar situation today in the Church.

Many of our best LDS scholars believe their own interpretations of the text of the Book of Mormon instead of the declarations of the prophets and apostles. They, like the scribes and Pharisees in New Testament times, have developed a scholarly consensus based on their interpretation of the text.

They claim they have the best, most accurate interpretation of the text, which allows them to produce a fantasy map to teach BYU and CES students, based on their M2C interpretation.

That's because they "can't unsee" Mesoamerica in the text.

They have, with their eloquence, persuaded thousands of LDS people to also reject the teachings of the prophets and apostles about the Hill Cumorah in New York.

They have established M2C (the Mesoamerican/two-Cumorahs theory) as the default (unofficial) position of the Church regarding the Hill Cumorah.

Because they have trained thousands of Church members to believe M2C--including most Church employees--they have managed to incorporate their dogma into Church media, visitors centers, etc.
_____

When we understand that the Biblical scribes and Pharisees were doing what they believed was correct, based on their traditions and their adherence to their interpretation of their sacred texts, we are more empathetic. But our empathy does not cause us to accept what they taught. Instead, we follow the Savior and his Apostles.

In our day, we are also empathetic with the latter-day scribes and Pharisees who are also doing what they believe is correct, based on their traditions and their adherence to their interpretations of our sacred texts. But our empathy does not cause us to accept M2C.

Instead, we follow the prophets and apostles, who have consistently and repeatedly taught that Cumorah is in New York.
_____

There's a simple cure for the approach of the scribes and Pharisees.

You can read it in Joseph Smith's own history here: http://www.josephsmithpapers.org/paper-summary/history-1834-1836/83

Then read the teachings of the prophets and apostles who have consistently and unanimously taught that Cumorah is in New York. You can read Articles of Faith by Elder James E. Talmage or A Marvelous Work and a Wonder by Elder LeGrand Richards. You can read or listen to conference talks on the topic and lots of other sources.