In 2017 the most popular post on this blog was "Watching General Conference with your BYU Book of Mormon professor." Today I'm releasing a youtube version of the post. It's at this link:

Many members of the Church don't realize that some intellectuals at BYU/CES continue to promote the Meosamerican/two-Cumorahs theory ("M2C"). This is the theory that Joseph Smith and Oliver Cowdery were mistaken when they taught that the Hill Cumorah was in New York.

Instead, the intellectuals claim that Cumorah is in southern Mexico (or somewhere else) because they know better than Joseph and Oliver did.

Of course, the problem with M2C is that the New York Cumorah was established as a fact in 1835 when President Cowdery of the First Presidency wrote and published Letter VII. This teaching has been consistently and repeatedly taught by members of the First Presidency and Quorum of the Twelve for over 150 years--including in General Conference--and has never been contradicted by any member of those quorums.

The only ones who have contradicted the New York Cumorah are a handful of intellectuals in the Church. Unfortunately, these intellectuals have widespread influence because they've been teaching at BYU and CES for decades.

This video depicts the thinking of anonymous BYU-affiliated scholars, as reflected by their writing. Of course, not all BYU/CES faculty agree with the views depicted here, but these views reflect the "consensus" of the intellectuals about Book of Mormon geography. 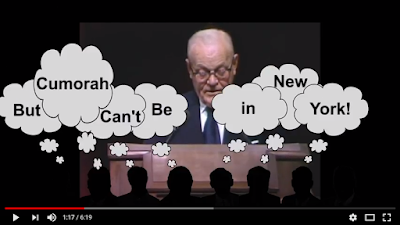 People ask me for the names of those who promote M2C, but this isn't a personality issue or an ad hominem argument. I personally like and respect these intellectuals, who are all faithful Latter-day Saints. I've had classes from some and have learned a lot from their books and articles. I cite them in my own work.

I just think they are mistaken about this one issue.

And it's a core issue for those who believe in the Book of Mormon and want to share it with the world.

I think M2C is destructive for the same reason Joseph Fielding Smith said; i.e., that it causes members of the Church to become confused and disturbed in their faith. I also think it impedes missionary work for the same reason. Because it relies on the premise that the prophets and apostles are wrong, it's a gateway drug to disbelieving the prophets and apostles on other issues.

To see M2C on display, read the web page and material put out by Book of Mormon Central America here: https://bookofmormoncentral.org/. They have a lot of good material, but they insist on M2C and thereby cause needless harm because they're teaching people to disbelieve the prophets and apostles.

It is no secret who promotes M2C. They are publicly associated with Book of Mormon Central America, which you can see here: https://bookofmormoncentral.org/directory

You can also see M2C on display at Meridian Magazine, BYU Studies, the Interpreter, and other groups affiliated with these intellectuals. A good guide to promoters of the Mesoamerican/two-Cumorahs theory is the Interpreter Foundation, here: http://interpreterfoundation.org/foundation/
Posted by jonathan3d at 7:02 AM