In 2017 the most popular post on this blog was "Watching General Conference with your BYU Book of Mormon professor." Next week I'm releasing a youtube version of the post.

As a preview, and in honor of President Monson's funeral today, I'm sharing a still frame from the video that shows young Elder Monson sitting next to young Elder Hinckley. They are in the lower left corner, next to the silhouettes of our BYU faculty who are watching General Conference with us. 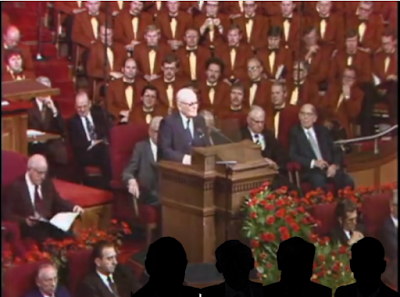 It's an interesting shot because there are four Presidents of the Church visible: Kimball, Benson, Hinckley, and Monson.

President Romney is at the podium, with President Kimball to his right and President Benson to his left behind him.

President Hunter was present, but not visible from this perspective.

In front of them you can see Boyd K. Packer and just a glimpse of Marvin J. Ashton.

For context, here are the members of the First Presidency and Quorum of the Twelve at the time. President Monson outlived all the others.

Quorum of the Twelve