A fascinating analysis explains how scientists have jumped on the wrong bandwagon regarding genetic research. There are so many parallels to M2C (the Mesoamerican/two-Cumorahs theory) and revisionist Church history that I wanted to share the article, along with key excerpts (in blue) and my observations (in red). In this post, I focus only on M2C, but the comparison to revisionist Church history (such as the book Saints) are obvious.

The entire article is worth reading (the link is below).

For example, the article describes the operation of citation cartels, such as the M2C citation cartel of Book of Mormon Central, FairMormon, BYU Studies, the Interpreter, etc.

Many fields of science, from psychology to cancer biology, have been dealing with similar problems: Entire lines of research may be based on faulty results. The reasons for this so-called reproducibility crisis are manifold. Sometimes, researchers futz with their data until they get something interesting, or retrofit their questions to match their answers.
This is the basic approach of M2C. The M2C intellectuals have reinterpreted the text to match Mesoamerica. Tapirs = horses. Towers = pyramids.
Other times, they selectively publish positive results while sweeping negative ones under the rug, creating a false impression of building evidence.
The M2C intellectuals rely on exactly this type of censorship and selective evidence to support the M2C hoax.
Beyond a few cases of outright misconduct, these practices are rarely done to deceive. They’re an almost inevitable product of an academic world that rewards scientists, above all else, for publishing papers in high-profile journals—journals that prefer flashy studies that make new discoveries over duller ones that check existing work.
This describes BYU Studies, the Interpreter, Meridian Magazine, and the rest of the M2C citation cartel. Within LDS culture, these are the "high-profile journals" that everyone assumes are correct because, as the M2C intellectuals and their employees have claimed, they have been hired by the modern prophets to guide the Church.
People are rewarded for being productive rather than being right, for building ever upward instead of checking the foundations. These incentives allow weak studies to be published. And once enough have amassed, they create a collective perception of strength that can be hard to pierce.
This is what makes the M2C citation cartel work. It's a "collective perception of strength that can be hard to pierce." For nearly 4 years I have offered an alternative to M2C, but the M2C intellectuals and their employees, especially the handful of employees at Book of Mormon Central, not only refuse to consider the possibility that the prophets are correct about the New York Cumorah, they refuse to even discuss the issue or allow their followers and readers to know what the prophets have taught.
https://www.theatlantic.com/science/archive/2019/05/waste-1000-studies/589684/?utm_source=pocket-newtab 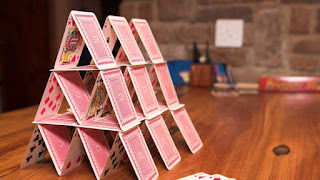 In 1996, a group of European researchers found that a certain gene, called SLC6A4, might influence a person’s risk of depression.
In the late 1800s and early 1900s, a group of RLDS researchers reached the conclusion that the Hill Cumorah is in southern Mexico and that the entire narrative took place in a limited geographic area of Mesoamerica. This is M2C.
Over the objections of LDS leaders, who reaffirmed the New York Cumorah in General Conference and purchased the hill in New York with Church funds, LDS scholars began adopting the RLDS theories. They taught it at BYU and CES for decades so that now, most members of the Church aged 60 or below have never learned anything different.
But a new study—the biggest and most comprehensive of its kind yet—shows that this seemingly sturdy mountain of research is actually a house of cards, built on nonexistent foundations.
Recent research on two fronts shows that M2C was built on a nonexistent foundation.
M2C was based on the twin assumptions that (i) anonymous articles in the Times and Seasons about Nephites in Central America were correct and (ii)  the LDS prophets, starting with Oliver Cowdery and Joseph Smith, and continuing through Joseph F. Smith in the early 1900s, were wrong about the hill Cumorah in New York. Today's M2C intellectuals and their followers, including most employees at CES, BYU and COB (the Church office building), continue to believe these twin assumptions.
But new research into Church history has discovered that the anonymous Times and Seasons articles had nothing to do with Joseph Smith and were never accepted or cited by him. Plus, of course, they had nothing to do with the New York Cumorah anyway. At the same time, new research has shown that Joseph, Oliver, and all their contemporaries and successors accepted the New York Cumorah.
On another front, new research into ancient North American civilizations demonstrates that the accounts in the Book of Mormon describe these civilizations, including their culture and locations, accurately and in detail. The New York Cumorah fits what anthropology, archaeology, geology and geography tell us.
Between them, these 18 genes have been the subject of more than 1,000 research papers, on depression alone. And for what? If the new study is right, these genes have nothing to do with depression. “This should be a real cautionary tale,” Keller adds. “How on Earth could we have spent 20 years and hundreds of millions of dollars studying pure noise?”
“What bothers me isn’t just that people said [the gene] mattered and it didn’t,” wrote the psychiatrist Scott Alexander in a widely shared blog post. “It’s that we built whole imaginary edifices on top of this idea of [it] mattering.”
Exactly.
“There’s an unwillingness to part with a previous hypothesis,” he says. “It’s hard to wrap your head around the fact that maybe you were on a wild goose chase for years.”
This is precisely what is happening with the M2C intellectuals at BYU, CES, and COB right now.
Dorothy Bishop of the University of Oxford argues that institutions and funders that supported candidate-gene work in depression should also be asking themselves some hard questions. “They need to recognize that even those who think they are elite are not immune to poor reproducibility, which leads to a huge amount of waste,” she says.
“We have got to set up a system, or develop a culture, that rewards people for actually trying to do it right,” adds Keller. “Those who don’t learn from the past are doomed to repeat it.”
Let's hope that the M2C citation cartel can somehow develop a culture that does not continue to rely on censorship, academic bullying, and elitism to continue to repudiate the teachings of the prophets.