Restatement of the obvious

There are a lot of new readers here so this week I'm going to restate the obvious and offer some simple solutions.

People generally prefer fun and nice topics, but we run the risk of deluding ourselves when we flinch from reality. Richard P. Feynman (physics professor) made a key point: "The first principle is that you must not fool yourself and you are the easiest person to fool."

On this blog, we like to deal with reality.

Another famous quotation to consider, this one from George Orwell. "We have now sunk to a depth at which restatement of the obvious is the first duty of intelligent men."
_____

There are a lot of awesome things happening in the Church, and in the world as a whole. But there are also serious--and obvious--problems that we generally don't like to think about.

We've seen before that conversion rates are declining significantly. I think one reason is the influence of the intellectuals in the Church, including employees at CES, BYU, and COB, who are teaching the youth (and investigators) to disbelieve the prophets regarding such fundamental points as the translation of the Book of Mormon and the Hill Cumorah. They are changing (and censoring) Church history to accommodate the M2C* intellectuals. Groups such as Book of Mormon Central are raising and spending millions of dollars to promote M2C around the world.

It's a serious problem that has real-world ramifications.

As Elder Uchtdorf pointed out in General Conference, "before we bake a cake, throw confetti, and congratulate ourselves on this remarkable success, we would do well to put that growth into perspective.

There are roughly seven and a half billion people in the world, compared to some 16 million members of The Church of Jesus Christ of Latter-day Saints—a very small flock indeed."**

By most estimates, activity rates in Church are around 30%. I'll post more detail on that later this week. This means there are around 5 million active members in the world, most of whom are concentrated in the western U.S.

Last summer, Elder Pearson gave an address at the FairMormon conference. He indicated there are about 1 billion people in the world who have heard of the Church, and half of them have unfavorable impressions.

These statistics indicate there are 500 million people in the world who have a favorable (or neutral) impression of the Church.

Yet last year, only 234,332 converts joined the Church. That is less than 0.05% of those who have a favorable (or neutral) impression of the Church.

For every 100,000 people in the world who have a favorable (or neutral) impression of the Church, only 47 of them joined.

We're grateful for every one of them, of course, but there are over 65,000 missionaries working full time to share the gospel and bring people into the Church. The statistics show 3.5 converts per missionary, but we all know of convert baptisms in part-member families that may or may not have involved the missionaries.

What barriers prevent people from accepting the Gospel as taught by the Church?

Every individual is different, of course. But we do have statistics, and one of the biggest barriers is disbelief in the historicity and divine authenticity of the Book of Mormon.

We've seen that only 50% of Millennials in the Church believe the Book of Mormon is a real history, and that percentage is declining.

That is the entirely predictable result of:

1. Repudiating the consistent and persistent teachings of the prophets about the New York Cumorah and

2. Teaching the Book of Mormon to students in CES (Seminary, Institute, and BYU) by using a fantasy map, as we've discussed before, such as here.

As bad as this situation is for the youth of the Church, it is even worse for investigators, as I'll discuss in upcoming posts.
_____

Last week we were in New England and we passed a full-size LDS church that was up for sale. We asked some friends in the area and they said two small wards had combined, leaving the chapel as surplus. (The listing price was a little over $900,000.) 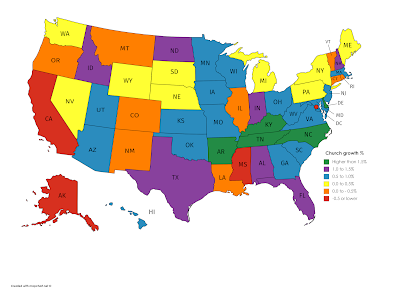 I looked into this more and discovered that last year (2018), 10 states, plus the District of Columbia, had declining LDS membership. (These are the states in orange and red on the map.)

No state had membership growth over 2%.

This is the first time in many decades that no state had membership growth above 2%, according to this outstanding blog.

IOW, even in the U.S., which is the strongest base of the Church, overall population growth rates exceed the growth of the Church.

Throughout the world, most of the growth of the Church is in areas that don't speak English and/or don't have easy access to the Internet. That strikes me as unsustainable.

It's not uncommon in the U.S. for a ward to have around 500 members with weekly attendance of only 100-150. In some countries, there are wards with over 1,000 members on the records, of whom only around 100 attend regularly.

He offered an interesting suggestion: leave the meeting and go get someone you know who is inactive and bring them to Church.

At a time when the Church should be expanding and "filling the earth," instead the statistics show stagnation and even decline in some areas.

I don't think it makes a difference what programs are developed, what ads are produced, or even how many temples are built, when the fundamentals that distinguish the Church from other Christian churches are being so deeply undermined by the intellectuals who promote M2C and revisionist Church history.
_____

This week I'll focus on specific issues of Church history and Book of Mormon historicity that have become impediments to missionary and activation work.

In my view (and my experience) these problems are becoming more serious, but there are simple remedies.

(Those who want me to continue the series on The Illusion of Scholarship will have to wait a little longer. There is much more coming on that topic, but this series of posts is urgent.)
_____

The M2C theory was developed by scholars in the Reorganized Church of Jesus Christ of Latter-day Saints (RLDS) in the late 1800s and early 1900s. At the time, the RLDS were sending missionaries to Utah to convert the "Brighamites" (those who accepted Brigham Young as the Prophet). The RLDS scholars began teaching that the real Cumorah was in Mexico. It was part of the competition between the two churches because President Joseph F. Smith was reaffirming the New York Cumorah and working toward purchasing the hill for the Church.

Later, over the objection of LDS Church leaders, some LDS intellectuals in Utah adopted the RLDS teaching.

By the 1980s, the RLDS teaching of M2C prevailed over the teachings of the LDS Church leaders, including members of the First Presidency speaking in General Conference.

Now M2C is a basic part of the curriculum in Seminary, Institute, BYU and Church visitors centers, media, etc. You can read about it here:

The teachings of the prophets about the New York Cumorah have all been censored. The latest example is the book Saints, as we've discussed here:

You can still find these teachings in the Joseph Smith Papers (Joseph had the foresight to have Letter VII copied into his personal history so the revisionist historians cannot censor it completely) and in the General Conference reports.

You can see a compilation here:

**The footnote to Elder Uchtdorf's talk is this:

The great prophet Nephi saw in vision that even though the Church of the Lamb of God would spread “upon all the face of the earth,” because of wickedness in the world its overall “numbers [would be] few” (1 Nephi 14:12; see also Luke 12:32).

And it came to pass that I beheld the church of the Lamb of God, and its numbers were few, because of the wickedness and abominations of the whore who sat upon many waters; nevertheless, I beheld that the church of the Lamb, who were the saints of God, were also upon all the face of the earth; and their dominions upon the face of the earth were small, because of the wickedness of the great whore whom I saw.

I've heard Church members cite this verse as a reason to be satisfied with the current progress of the Church, as if "all is well in Zion." (2 Ne. 28:21).

If we interpret the term "few" literally, then 16 million is already far more than "few."

This suggests the term should be interpreted as a relative description; i.e., "few" in the context of 7.1 billion people. Even with ten times as many members of the Church as there are today, the number would be "few" compared with the 7 billion people on earth.

Nephi attributes the smallness of the number to the wickedness of the great whore, and that makes sense, but there can also be a separate element, as Joseph Smith suggested:

D&C 123:12 For there are many yet on the earth among all sects, parties, and denominations, who are blinded by the subtle craftiness of men, whereby they lie in wait to deceive, and who are only kept from the truth because they know not where to find it—

The phrase "all sects, parties and denominations" does not exclude LDS. It seems to me that the teachings of certain intellectuals constitute "the subtle craftiness of men" and prevent the honest in heart from finding the truth.