When you know the truth, you are confident, serene, and generous.

But the same is true when you believe a hoax. Reality and confirmation bias look like the same thing to us.

So how do we tell whether what we believe is the truth or a hoax?

Every member of the Church knows, or should know, these two things:

1. The prophets have consistently and persistently taught that the New York Cumorah is the hill Cumorah of Mormon 6:6.

(Those who don't know these teachings need to review the BYU packet, here:
http://www.lettervii.com/p/byu-packet-on-cumorah.html)

2. The M2C intellectuals teach that the prophets are wrong about Cumorah (M2C is the acronym for Mesoamerican/two-Cumorahs theory taught by employees at CES, BYU, COB and the M2C citation cartel, led by Book of Mormon Central).

We trust people to make good decisions when they have good information. If they don't agree with us, that's fine, so long as they are making informed decisions.
_____

Book of Mormon Central censors the teachings of the prophets about the New York Cumorah because they know most members of the Church would follow the prophets if they knew what the prophets have taught.

Censorship does not work in the long run. It disrespects people and deprives them of agency. Here's a relevant example about America's Founders from a WSJ article: 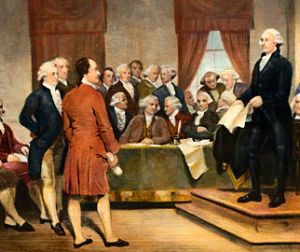 America’s Founders rested the legitimacy of government on the will of the people, mediated through institutions such as the Senate and the Electoral College. They knew voters could be ignorant, gullible or manipulated by demagogues. To mitigate those concerns, they recommended education and free expression, so that false or dangerous claims could be exposed or refuted. They did not prohibit foreigners access to the American press. Soon enough, they were dealing with propagandists and would-be dictators, foreign and domestic, such as Aaron Burr and Napoleon. But whatever the drawbacks of the electorate and of a free press, they reposed their trust in the people to come to their own conclusions.

Those of us who still believe the prophets also trust people to come to their own conclusions, so long as they have good information.
_____

I previously discussed the phenomenon that people who have the same information still reach different conclusions. If you haven't seen that, or don't remember it, review it again:

Much of the discussion and debate about Book of Mormon geography involves different interpretations and assumptions about the text. To the extent that these discussions extend beyond sharing information, they are pointless because semantic debates can never be resolved with finality.

Plus, you'll often see employees of Book of Mormon Central making arguments on behalf of their boss. You can't change the mind of an employee who wants to keep his/her job.

A simple strategy that will save you so many headaches: don't care about winning trivial arguments.

Someone says something you don't agree with? Smile, nod, and move on to more important things.

Life is short. Not caring about having the last word will save you so much time.
_____
Posted by jonathan3d at 8:28 AM