Readers here know that I have lots of old books that I refer to from time to time. I also like replicas of old books.

When I taught at the LTM (MTC) years ago, I used to ask the missionaries for their favorite verse from the Book of Mormon. Then I photocopied that verse in a page from the original 1830 edition and laminated it for them as a bookmark for their scriptures. (No one had digital scriptures back then.)

I still prefer the original (pre-1879) editions of the Book of Mormon because they are easier to read, although certainly the verses make it easier to refer to specific passages. I think Orson Pratt made some mistakes when he created today's chapters and verses, but overall he did a fine job. However, it's always nice to read the text the way Joseph originally had it typeset.

Not long ago we visited Dartmouth, where the library has an original 1830 edition (with the Kirtland index at the back) that they let visitors handle. On another occasion, a friend of mine showed me his original 1830 edition. I opened the cover to see that his grandchildren had scribbled in crayon all over it. He said his grandchildren were more important than an old book, and of course I agreed with him.
_____ 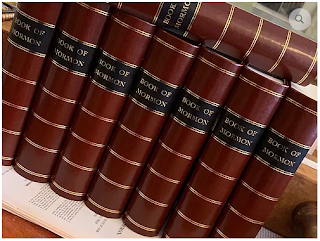 Yesterday I saw the best replica of the 1830 Book of Mormon I've ever seen. If you're interested in this type of thing, you can check it out at this website:

I like this one best of all the ones I've seen because of its look and feel, and the people who created it pay a lot of attention to detail and authenticity.

They have replicas of other early LDS books that are worth considering, as well.