I didn't mention this yesterday, but one of the best examples of two movies on one screen is the ongoing discussion about volcanoes. (I discussed volcanoes last year here.)

Everyone can read the text of the Book of Mormon and see it never mentions volcanoes.

In a rational world, everyone would look for an area that fits this description; i.e., a place where people could live for 1,000 years without experiencing or even knowing about an actual volcano, so they never wrote about them. 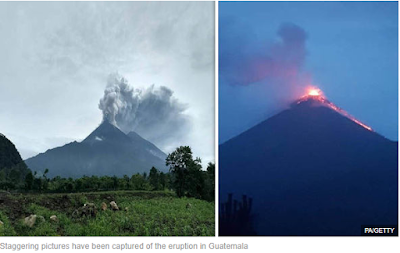 However, a core belief among M2C theorists is that the Book of Mormon does mention volcanoes. They must believe this to justify M2C; i.e., Mesoamerican cultures have lots of experience with volcanoes, so the Nephites/Lamanites must have also experienced volcanic activity.

Because they need volcanoes, the M2C intellectuals "see" them between the lines of the text. They infer that the text describes volcanoes. They have persuaded themselves that the natural events described in 3 Nephi 8 could only have been produced by volcanic activity.

Those who see a different movie recognize that those same identical events have actually occurred in the Mississippi River valleys as the result of massive earthquakes (mainly the New Madrid fault).
_____

Here's a summary from comments on a recent blog:

I just checked 3 Nephi 8 and there is no mention of a volcano, as the authors of the Interpreter article contend. Also, it is not apparent that the author in the Book of Mormon was witness to the events described in the section, as the authors assert.

For a detailed analysis, see

In the Thirty and Fourth Year: A Geologist's View of the Great Destruction in 3 Nephi

https://byustudies.byu.edu/content/thirty-and-fourth-year-geologists-view-great-destruction-3-nephi
For an even more detailed, book length analysis, see Jerry Grover, The Geology of the Book of Mormon
https://archive.bookofmormoncentral.org/content/geology-book-mormon
For another take on ice core evidence, see Benjamin Jordan in JBMS here:
https://publications.mi.byu.edu/publications/jbms/12/1/S00008-50e5fa62cbc4c9Jordan.pdf
The author of the 3 Nephi (Mormon)  had lots of records from eye witnesses to work with.
FWIW
The cited references from M2C supporters offer enough evidence to confirm the biases of the authors and readers. That's one movie.
But those same references are entirely unpersuasive to those who don't accept M2C because the events described in the text can be explained by natural causes other than volcanic activity.
_____
My summary: The text doesn't mention volcanoes, so presumably there were no volcanoes throughout Nephite history.
The one "movie on the screen" in this case is the text of the Book of Mormon.
One group (M2C) who views the film (reads the text) sees volcanoes, albeit not explicitly.
The second group (Moroni's America, Heartland, etc.) who views the film (reads the text) sees no volcanoes, but instead a nice eyewitness account of earthquakes along the Mississippi River.
Which movie do you see when you read the text?
Posted by jonathan3d at 9:14 PM