Come follow me: Luke 20 and the New York Cumorah

I've been traveling a lot lately, accumulating evidence that I'll discuss soon, but in the process, we've visited different wards and enjoyed a variety of lessons.

The readings for last week's Come Follow Me lesson included Luke 20, although that chapter was not actually cited in the lesson materials.

Here is the text in blue, along with my comments in red.

1 And it came to pass, that on one of those days, as he taught the people in the temple, and preached the gospel, the chief priests and the scribes came upon him with the elders,

These are the M2C intellectuals confronting all the prophets who have taught that Cumorah is in New York.

2 And spake unto him, saying, Tell us, by what authority doest thou these things? or who is he that gave thee this authority?

The M2C intellectuals teach their followers that President Oliver Cowdery and all the other prophets and apostles had no authority to teach the New York Cumorah.

3 And he answered and said unto them, I will also ask you one thing; and answer me:

Those Church members who still believe the prophets ask the M2C intellectuals this same question.

4 The baptism of John, was it from heaven, or of men?

The New York Cumorah, was it from heaven, or of men?

5 And they reasoned with themselves, saying, If we shall say, From heaven; he will say, Why then believed ye him not?

The M2C intellectuals reason among themselves, saying "If we shall say the prophets are inspired, Church members will ask, why don't you believe them?"

6 But and if we say, Of men; all the people will stone us: for they be persuaded that John was a prophet.

The M2C intellectuals think, "If we say those prophets who taught the New York Cumorah were speaking as men, Church members will reject us because they believe the prophets."

7 And they answered, that they could not tell whence it was.

Our M2C intellectuals answer by saying, "we cannot say where the teaching of Cumorah came from."

But today's M2C intellectuals are more clever than the scribes of old. They avoid answering the question about the prophets with two techniques:

1. They censor the teachings of the prophets (e.g., the Saints book), but when members discover those teachings on their own, they resort to their second tactic.

2. They confuse members of the Church by mixing up two separate teachings; i.e., the prophets have taught that (i) Cumorah is in New York and (ii) we don't know the locations of other events. The M2C intellectuals quote the second teaching and claim it applies to the first.

8 And Jesus said unto them, Neither tell I you by what authority I do these things.

After observing how intellectuals in the Church have repudiated the teachings of the prophets about the New York Cumorah, current Church leaders have left it to each member of the Church to decide for ourselves whether to believe the prophets or the intellectuals.
_____ 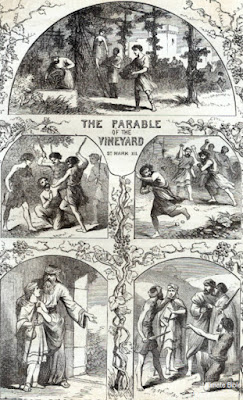 I won't take the time to go through verses 9-18, but as you read them, think of the parable of the tenants (vineyard) in the context of the New York Cumorah.

The Lord sent his prophets to teach the New York Cumorah, starting with Moroni teaching Joseph Smith, President Oliver Cowdery teaching the Church, and all the subsequent prophets and apostles reaffirming these teachings.

Intellectuals in the Church have cast out these prophets, one after the other.

Their followers likewise cast out the prophets, preferring the wisdom of men as taught by CES and BYU.

Those members of the Church who still believe the prophets can be confident that soon enough, "the stone which the builders rejected, the same will become the head of the corner."