From time to time, we want to clarify our position regarding Book of Mormon Central and the rest of the M2C citation cartel (FairMormon, BYU Studies, Interpreter, etc.).

On a personal level, I like everyone I've met who participates in the M2C citation cartel.

Most of the Church members I know who still believe the teachings of the prophets about the New York Cumorah feel the same way about the people in the M2C citation cartel. We stipulate that everyone involved with the cartel is faithful, devoted, educated, intelligent, loving, wonderful, etc.

If we didn't love them, we wouldn't care enough to offer constructive criticism. None of our criticisms are personal in nature.

We appreciate much, maybe most, of what they do. I'll put the figure of 90% on it. IOW, we like 90% of the material they publish.

I think that, if not for M2C (Mesomania), I'd like 98% of what they do. (There remain lingering problems from revisionist Church history, most of which are attributable to M2C.)
_____

For example, here are some of the truly great things Book of Mormon Central provides. I'm grateful to have them available, and I recommend these resources all the time.

1. The Royal Skousen material on the earliest manuscripts of the Book of Mormon.

The problem is, M2C taints almost everything the citation cartel produces.

FairMormon has a lot of good material, but M2C is woven throughout.

The Interpreter and BYU Studies have some good articles, but anything touching on Church history and/or Book of Mormon is edited to promote, or at least accommodate, M2C.

For those of us who still believe the teachings of the prophets, we can't recommend that our friends (aka investigators) or less active members seek answers from Book of Mormon Central, FairMormon, the Interpreter, BYU Studies, etc., because M2C undermines their faith. 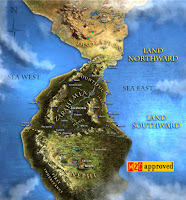 These resources actively teach that the prophets are wrong about the New York Cumorah and other issues. Teaching aids such as the CES and BYU fantasy maps depict the Book of Mormon as fictional.

Sending people to the M2C citation cartel is akin to sending them to CES Letter, except that CES Letter is more open about its opposition to the teachings of the prophets.

We think the M2C citation cartel is worse, actually, because the M2C advocates claim the support of the prophets and the Church for their teachings--even when they say the prophets are wrong.
_____

This is not to say that we expect the M2C citation cartel to suddenly accept the teachings of the prophets.

Instead, all we ask is that they cease their monolithic opposition to the teachings of the prophets.

The situation would be different if the M2C citation cartel (including employees at BYU, CES and COB) followed the Church's position on neutrality.

That's what we do on this blog. We frequently refer readers directly to the M2C citation cartel so they can see for themselves what is being taught.

We want our readers to make informed decisions and trust them to do so.

We don't care what people decide. We just want them to make informed decisions.

That's not the case with the M2C citation cartel.

M2C depends on censorship and sophistry to undermine faith in the teachings of the prophets.

If the cartel trusted their readers, listeners, and viewers to make informed decisions, cartel members would not insist on M2C exclusively. They would present, or allow others to present, the information that corroborates and supports the prophets, instead of censoring that information.
_____

We think the psychology of bias confirmation is too strong to allow members of the M2C citation cartel to change their minds, or even to inform their readers and followers of alternative perspectives.

Plus, the M2C citation cartel has a tremendous investment in M2C, including professional, financial, and psychological investments.

IOW, even though sunk costs are sunk and should not be considered going forward, we don't think the situation is going to change.
_____

Soon, we will announce an alternative to the M2C citation cartel that people can refer to without the M2C barriers to faith.
Posted by jonathan3d at 8:30 AM