The idea has been explained by the metaphor of watching two movies on one screen. I discussed this previously here. I've also demonstrated it as analogous to watching a 3D movie, when each eye looks at the same screen but sees a different image because of the filters in the lenses of the glasses.

The red and blue lenses filter the two projected images so only one image enters each eye.

(Note: obviously in this case there are actually two different images on the screen. This is a conceptual metaphor, not a literal one.)

Because our physical perception is heavily influenced by our belief system and past experience, it is a common psychological phenomenon for two people to see the exact same image but interpret it completely differently.

One reason for this is cognitive blindness; i.e., the two people don't see the same facts the same way because each person is blind to what the other person sees.

Another term for this is perceptual or inattentive blindness, explained this way: "When it becomes impossible to attend to all the stimuli in a given situation, a temporary “blindness” effect can occur, as individuals fail to see unexpected but often salient objects or stimuli."

The mostly subconscious choice about what is salient is related to bias confirmation. People see what they expect and want to see. 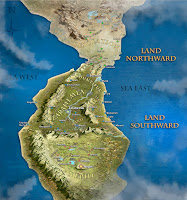 Look at this BYU map of the Book of Mormon as an example. CES uses a similar map in Seminary and Institute classes.

Movie 1. This is an internal map that (i) matches the geography descriptions in the text as closely as possible, (ii) is neutral on questions of real-world geography, and (iii) helps students understand the relative locations of Book of Mormon events.

Movie 2. This is a fantasy map that (i) is based on a Mesoamerican interpretation of the text, (ii) represents a repudiation of the teachings of the prophets about the New York Cumorah, and (iii) teaches students to think of the Book of Mormon in a fictional fantasy context.

If you think one of these movies is "right" and the other is "wrong," you are experiencing cognitive blindness to the other movie.

This is the psychology behind different political parties, religious affiliations, beliefs about science, and much more.

It is very difficult to see both movies at the same time. We may not even be able to choose which movie to watch because we usually aren't aware there are two movies. We "can't unsee" our own movie, and we "can't understand" why other people see the movie they do.
_____

I've explained many times that I'm not trying to persuade anyone of anything. All I do on this blog and in my books and presentations is explain how I understand the facts and how things make sense to me.

I've seen both movies regarding Book of Mormon geography. For decades I accepted the M2C movie. I can still see it if I make the effort, but because of what I've learned since I accepted M2C, it is more and more difficult to watch that movie.

At this point, I think most members of the Church accept the M2C movie only because they are blind to the other movie that's on the screen.

And the M2C citation cartel (Book of Mormon Central, BYU Studies, the Interpreter, FairMormon, etc.) continue to use censorship and obfuscation to keep members of the Church blind to the other movie.

1. Teachings about the New York Cumorah.

(you can see these here: http://www.lettervii.com/p/byu-packet-on-cumorah.html)

Movie 1. All these statements about the New York Cumorah consist of the sincere but mistaken beliefs of those involved. Even members of the First Presidency speaking in General Conference can express their own opinions and testify of their truthfulness, yet be mistaken.

Movie 2. All of these statements about the New York Cumorah originated with Joseph and Oliver, who knew from personal experience that Cumorah was in New York. Repudiating their teachings, as well as the teachings of subsequent prophets, undermines faith.

2. Visit to the Nephite repository.

Movie 1. Brigham Young, Heber C. Kimball, Wilford Woodruff, David Whitmer and others said Oliver told them about occasions when he (Oliver) and Joseph visited the repository of Nephite records inside the Hill Cumorah. Oliver must have been speaking of visionary experiences because the Hill Cumorah is a drumlin that could not contain a natural cave such as Oliver described.

Movie 2. Brigham Young, Heber C. Kimball, Wilford Woodruff, David Whitmer and others said Oliver told them about occasions when he (Oliver) and Joseph visited the repository of Nephite records inside the Hill Cumorah. They were familiar with the area and emphasized the physical reality of Oliver's description. Kimball reported visiting Cumorah and seeing the embankments around it. Oliver never said it was a natural cave, and photos of an actual room in the hill show walls built up with cut stones.

Movie 2. In 1842, the Times and Seasons published anonymous articles about ruins in Central America and identified them as Nephite ruins, the site for Zarahemla, etc. Joseph was listed as the nominal editor, printer and publisher, but he didn't actually edit the paper any more than he actually printed it. Based on the content and prior practice, the articles were written and edited by Benjamin Winchester, W.W. Phelps, and William Smith; Joseph had nothing to do with them. At any rate, these articles said nothing about the New York Cumorah.

Movie 1. Moroni put the golden plates into the stone box in the hill in New York. This was the only set of plates, and it included both the abridged records of the Nephites and Lamanites, and the original plates of Nephi (the small plates). Joseph translated part of the record in Harmony, and part in Fayette. The witnesses described the plates differently because of differences in their own perceptions.

Movie 2. Moroni put the "original" Book of Mormon into the stone box in the Hill Cumorah. This contained the abridged records of the Nephites and Lamanites as explained in the Title Page, but did not include any original plates of Nephi. Joseph translated these plates in Harmony. Before leaving Harmony, he returned these plates to a divine messenger, who took them back to the depository in Cumorah. From the depository, the messenger picked up the small plates of Nephi and took them to Fayette, where Joseph translated them. The witnesses described the plates differently because they saw different sets of plates; i.e., the 3 witnesses saw the original plates, while the 8 witnesses saw the small plates of Nephi.
_____

There are many examples of the two movies, including different interpretations of passages in the text of the Book of Mormon and D&C, different explanations for the teachings of the prophets, etc.

Most people want to know, how can we decide which movie is correct (or more likely to be correct)?

Appeals to authority and other logical fallacies are useful mainly to confirm one's bias.

Citing additional facts is not persuasive because of cognitive blindness.

The book The Next Mormons includes data showing that younger generations are less likely to believe the Book of Mormon is a literal history. Causation and correlation are not the same thing, of course, but it seems obvious that teaching the Book of Mormon using a fictional map would lead students, even if only subliminally, to conclude the book is fiction. More data could help determine causation here.

Overall, though, the best way for people to decide which movie is correct is for each person to have a chance to see each movie.

This is why the ongoing censorship by the M2C citation cartel is so corrosive and, ultimately, counterproductive.