Another thing we discussed the other night was the spectrum of faith vs empiricism. I showed this image that reflects variations in the amount of extrinsic evidence a person needs to believe something. It is comparable to the range of spiritual gifts in D&C 46, although the concept is not unique to Mormonism or any particular topic. We all appear at different parts of this spectrum regarding different topics in life because everyone believes some things and doesn't believe others. 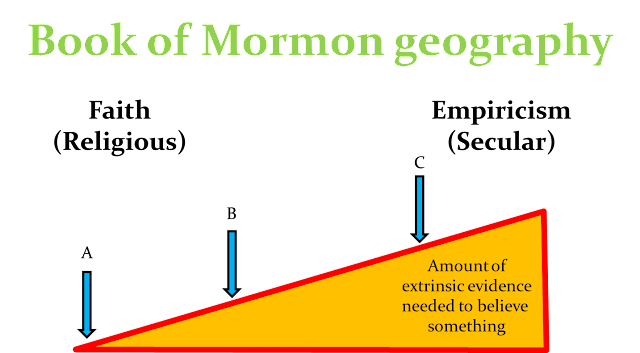 The modern world is increasingly secular. It's interesting to read early Church newspapers and books, because the authors such as Parley P. Pratt and Benjamin Winchester actually relied on the Bible in their efforts to prove the truthfulness of the restoration, the Book of Mormon, etc. Back then, the public generally accepted the Bible.

While that's still the case among some groups today, for the most part, people don't believe the Bible. It has little if any convincing power, as missionaries around the world know. (That's a topic that deserves its own blog.)

A person at point A believes without requiring any evidence, whether because of a spiritual gift, because of allegiance to parents, family and culture, or even, in some cases, apathy. They just believe, as a sort of default position. They have a presumption that their beliefs are correct and it would take a lot of evidence to convince them otherwise. I have Muslim, Hindu, Mormon, Catholic and Protestant friends at point A.

A person at point B believes partly because of faith and partly because of evidence. Maybe it's a spiritual experience, or the result of some study of history, philosophy, etc. This is analogous to the legal standard of a preponderance of the evidence; i.e., the person believes something if it more likely than not that it is true.

A person at point C relies primarily on extrinsic evidence. Maybe they don't trust spiritual feelings, or maybe they observe that religious people have such different and even contradictory beliefs. They require proof beyond a reasonable doubt.
________________


The chart can also be viewed as showing the amount of evidence it takes to change one's mind. The extremes are mirror images; i.e., a person who believes idea X at point A will require a lot of evidence to change his/her mind (sliding up the scale toward C).

In the context of Book of Mormon geography, people also find themselves along a scale. I know people who claim a spiritual witness of geography, ranging from Colombia through Central America to North America. I'm told people living in Chile and Peru have similar spiritual witnesses. In my view, people can have spiritual witnesses of the truth of the Gospel, which is often conflated with other ideas, such as Book of Mormon geography. Obviously, ancient Zarahemla cannot have been in Peru, Colombia, Panama, Mexico, Baja, Iowa, and New York, all at the same time. It could only exist in one place.

Consequently, we need to use study and faith, as the scriptures direct.

But how do we determine what standard of proof to apply?

Ideally, we would apply the same standard of proof to each possibility. But realistically, we all start somewhere. Everyone should consider where they are right now in terms of your beliefs about the geography question, and then consider what part of the spectrum you're on.

I can only speak for myself, so I will right now. Thanks to years of what I now consider indoctrination, I accepted the Mesoamerican theory as a default position, basically on faith, from Seminary or earlier through college and beyond. Sure, there were academic-looking papers and books that supported the theory, but I read them mainly to confirm my biases. I was pretty much at point A, or maybe point B.

A few years ago, I paid more attention to the issue when I realized there were alternatives far more diverse than the ongoing squabbles about which river in Southern Mexico was the Sidon. I looked at the Heartland model in particular and imposed a heavy burden of proof before I would change my mind. The more I looked into it, the more sense it made.

Then I turned my focus back on all the things I'd read for decades at FARMS, FAIRMORMON, BYU Studies, etc. (the citation cartel). Instead of simply accepting the material to confirm my biases, I examined it on the merits. The result is what you've been reading in this blog.

I keep this diagram in mind whenever I read material written and published by the citation cartel. Some perfect examples are the Mesoamerican-oriented KnoWhys published by Book of Mormon Central. Their threshold for belief in Mesoamerica is so low that they willingly accept the idea that the Nephites made wine out of bananas, but they find it impossible to believe the Nephites made wine out of grapes, purely because grapes are indigenous to North America but not Central America.

There are lots of examples, but the most extreme is probably their attitude toward the hill Cumorah. For ideological reasons (i.e., to preserve their Mesoamerican theory), they claim Oliver Cowdery made up the idea that the hill where Joseph Smith found the plates was Cumorah and that David Whitmer and Joseph Smith himself passively accepted Oliver's fantasy and incorporated it into their own writings and memory. They argue that all the evidence to the contrary is not "conclusive" and therefore Joseph didn't know where Cumorah was, so we should look in Mesoamerica instead.

The best part is, they think the anonymous articles in the Times and Seasons are the most relevant and conclusive evidence, as opposed to the supposedly completely unreliable yet definitive, unambiguous declarations in Letter VII that Joseph helped write, put into his own journal, and had republished at least three times in Church newspapers for everyone to read.

My problem is that the citation cartel seeks to enforce their beliefs by denying others access to information about alternatives. They completely dominate BYU and CES, so kids attending these institutions hear only the Mesoamerican perspective, as I did growing up.

In the long run--well, even in the short run--it is much better to provide as much information as possible about both theories to as many people as possible, so the people can make up their minds.

That's why I encourage readers to examine both the Mesoamerican and North American theories and think for themselves.

The citation cartel thinks exactly the opposite. They don't want people to even know about, let alone examine, the North American geography.
____________________

Back to the chart. What this depicts is not only a scale of individual approaches toward faith and evidence, but society's scale. 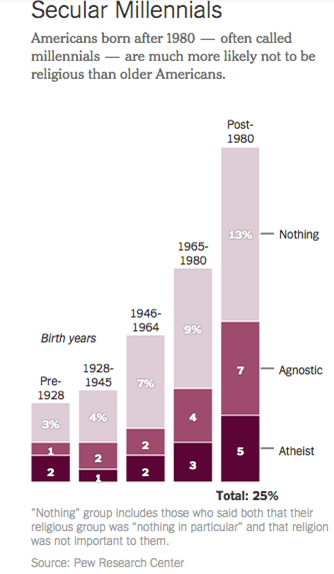 I think that can be a good thing.

In fact, I think Joseph Smith was an empiricist, which is why he needed the plates even though he didn't use them to do the actual translation. He needed them to know he was translating an actual ancient history.

I think Oliver Cowdery and David Whitmer were also empiricists, which is why they were so precise and careful in their descriptions of the events that changed their lives. They both clearly distinguished between speculation and personal knowledge, which is one reason they were so effective as two of the three witnesses. (And this is why I find the efforts of the Mesoamerican advocates to undermine their accounts so counterproductive.)

I also think the North American setting holds up, and will continue to hold up, much better than the Mesoamerican theory as people seek for stronger and better extrinsic evidence.