MAY DAY: Will Rogers in Soviet Russia

Okay, Rogers didn't actually have to deal with the Mesoamerican citation cartel, but this piece from the Wall St. Journal, commemorating May Day, is a nice parallel to what we see in publications from the citation cartel.

Here's the link to the original: http://www.wsj.com/articles/notable-quotable-will-rogers-in-soviet-russia-1462139422 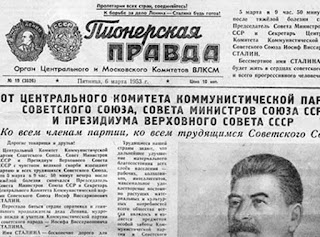 ‘The whole idea of Communism’ is ‘based on propaganda and blood.’

From the Wall St. Journal:

From humorist Will Rogers’s “There’s Not a Bathing Suit in Russia & Other Bare Facts” (1927), a collection of articles about his travels for the Saturday Evening Post:
It seems the whole idea of Communism, or whatever they want to call it, is based on propaganda and blood. Their whole life and thought is to convince somebody else. It looks to me like if a thing is so good and is working so fine for you, you would kind of want to keep it to yourself. I would be afraid to let anybody in on it, and that generally seems to be about the usual brand of human nature everywhere. But the Communist has so many good things he just wants you to join in and help him use some of them. . . .
They are trying to foster art and culture, but all of it is of the Revolutionary type. If it is a painting, the main character has one foot on a capitalist’s neck and is punching another capitalist in the jaw. But the main thing that dominates this whole thing is to spread propaganda. Talk about some of our states guarding what their schoolbooks contain—these children never get a chance to read anything only about how terrible everything is but Communism.
You can’t go to a bookstore and buy any book you want. Every book that is sold in Russia has to be O.K.’d by the Soviet party. You can’t buy outside newspapers, and every paper printed in Russia is under the supervision of the government. So you have got to learn their angle or you don’t learn anything—there is nothing else for you to form an opinion about.
Posted by jonathan3d at 7:27 PM