Letter VII was published in the Messenger and Advocate in July 1835. When he wrote the letters to Phelps, Oliver said Joseph Smith helped him. Scholars who promote the Mesoamerican "two-Cumorah" theory respond in these ways to Letter VII (which unequivocally rejects the two-Cumorah theory and places the Hill Cumorah squarely in western New York):

1. They question Oliver's statement that Joseph helped write the letters.

2. If they accept that Joseph helped write the letters, they claim Joseph himself was also speculating about the Hill Cumorah (or that Joseph passively accepted Oliver's speculation).

Here I present evidence on the first point; i.e., how Joseph and Oliver worked together during 1835.

In September, Joseph made three entries in a book titled "Sketch Book for the use of
Joseph Smith, jr" (referred to in the Joseph Smith Papers as Journal, 1835-1836). The book was titled by Oliver Cowdery, who also wrote the first entry. Joseph made three subsequent entries, and then Oliver took over again. 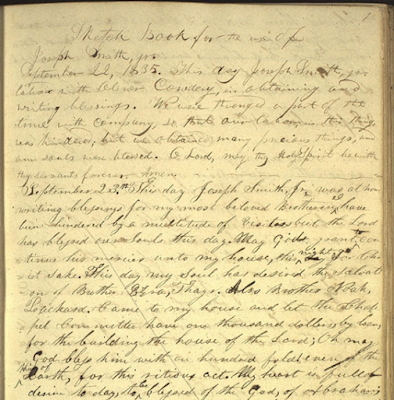 You can see this yourself at this link.

Here is what the text says. The part in italics is Oliver, the part in bold is Joseph:

Sketch Book for the use of
Joseph Smith, jr.
22 September 1835 • Tuesday
September 22, 1835. This day Joseph Smith, jr.  labored with Oliver Cowdery, in obtaining and  writing blessings. We were thronged a part of the  time with company, so that our labor, in this thing,  was hindered; but we obtained many precious things, and  our souls were blessed. O Lord, may thy Holy Spirit be with  thy servants forever. Amen.
September 23.th [22nd] This day Joseph Smith, Jr. was at home  writing blessings for my most beloved Brotheren <I>, have  been hindered by a multitude of visitors but the Lord  has blessed our Souls this day. May God grant <to> continue his mercies unto my house, this <night,> day For Christ sake. This day my Soul has desired the salvation of Brother Ezra, Thay[e]r. Also Brother Noah,  Packard. Came to my house and let the Chappel Committee have one thousand dollers, by loan,  for the building the house of the Lord; Oh may  God bless him with an hundred fold! even of the  <things of> Earth, for this ritious [righteous] act. My heart is full of  desire to day, to <be> blessed of the God, of Abraham;

The writing styles are different, but the narrative is continuous.

These two writing samples also show us why Joseph relied on Oliver to do the writing. Oliver's sentences are clear and accurate, while Joseph's are more like spoken language.

You can see the differences more clearly in this image, with Oliver inside the red box and Joseph inside the blue. 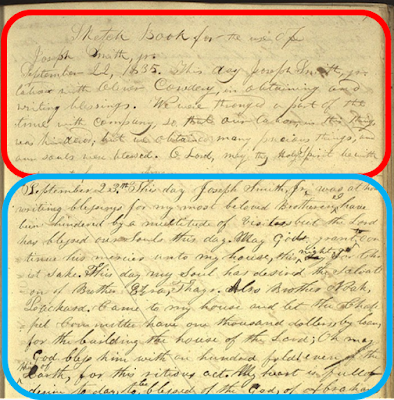 Later, when Joseph finished his entries, Oliver resumed writing in this journal. You can see that here.

When we read this shared journal, it's not surprising or strange that Joseph would direct his scribes to copy Oliver's letters into his own journal as part of his own life history.

The only thing that is surprising and strange is that LDS scholars reject Letter VII.