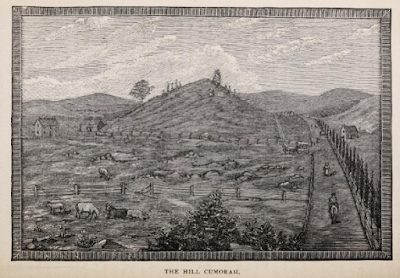 I realize the topic of Cumorah has been discussed a lot lately, so don't read this if you're tired of the Cumorah topic. I actually covered this topic in detail last August, here. I'm writing today because of a new bit of information that's always been available but I didn't really notice until now and I wanted it here on the blog as a note for future reference.

If you're new to this topic, it has to do with two of the Three Witnesses. Those who advocate a Mesoamerican geography reject Oliver Cowdery's description of Cumorah in Letter VII. They also reject David Whitmer's explanation of the first time he heard the word Cumorah (which he said was in June 1829, before he'd ever read the text, and he heard it from a heavenly messenger).

The rationale for rejecting David Whitmer's testimony is that he supposedly never talked about it until 50 years after the fact, in interviews he gave to Edward Stevenson in 1877 and to Joseph F. Smith and Orson Pratt in 1878.

Here's how one scholar articulated the argument (I won't mention names, but you can get it from my August post if you're interested):

"The earliest possible connection between the New York hill and the Book of Mormon Cumorah comes from an 1878 interview with David Whitmer by Orson Pratt and Joseph F. Smith,... This report [the Whitmer interview] would be much more conclusive had it not been recorded nearly fifty years later. The passage of time and the accepted designation of “Cumorah” as the name of the New York hill by the time of the recollection argue against the second-hand report from Whitmer as being a definitive statement."

There are all kinds of logical errors in that statement, but I've addressed those before. Today, I want to point out something in the Stevenson statement, taken from his contemporaneous journal.

I obtained a copy of Stevenson's journal recently and here's what his entry says:

"I wish to mention an Item of conversation with David Whitmer in regard to Seeing one of the Nephites, Zina Young, Desired me to ask about it. David Said, Oliver, & The Prophet, & I were riding in a wagon, & an aged man about 5 feet 10, heavey Set & on his back, an old fashioned Armey knapsack Straped over his Shoulders & Something Square in it, & he walked alongside of the Wagon & Wiped the Sweat off his face, Smileing very Pleasant David asked him to ride and he replied I am going across to the hill Cumorah. Soon after they Passed they felt Strangeley and Stoped, but could see nothing of him all around was clean and they asked the Lord about it. He Said that the Prophet Looked as White as a Sheet & Said that it was one of the Nephites & that he had the plates."*

Edward Stevenson was a general authority (one of the seven presidents of the Seventy). He was a well-known missionary (one of the MTC buildings is named after him). There's no reason to doubt the credibility of his interview with David Whitmer.

What I find fascinating is that Zina Young asked Stevenson to ask David Whitmer about seeing one of the Nephites. That was the focus of the interview, not the Cumorah question.

This means that Zina had heard this story earlier.

And when could she have heard it?

It could not have been from the interview with Joseph F. Smith, which occurred a year later.

Instead, it's highly likely she heard it from David Whitmer directly!

Zina was born in 1821. Her family lived in Watertown, New York. In 1835, when she was 14 years old, two missionaries came to town: Hyrum Smith and David Whitmer. Hyrum baptized her on August 1, 1835. The family moved to Kirtland, and eventually to Far West, and then to Nauvoo along with most of the rest of the Saints. Zina married, had two children, and then also married Joseph Smith. After his death, she married Brigham Young. (That's a topic for another day.)

David Whitmer left the Church in 1837-1838 and lived in Missouri for the rest of his life. Zina would have had no contact with him after about 1837, at the latest. If that's the case, then she could only have heard the story from him between 1835 and 1837--just a few years after 1829, when David said the event happened.

Of course, modern Mesoamerican scholars will dispute this somehow, but the argument that David's testimony is unreliable because it was 50 years late contradicts the Stevenson account.

Interestingly, Zina was also the one who inherited Joseph's seer stone after Brigham Young died.

The simplest, historically justified explanation is that David told Zina and her family the story when he contacted them as a missionary. Zina remembered it and told Stevenson to ask David about it in 1877. Stevenson recorded it and wrote about it.

Then Joseph F. Smith asked David about it, and he reiterated his account of the event.

It's not a 50-year-old story related from a feeble and tainted memory. It's a retelling of an account related by a missionary to his investigators just a few years after the event.

Other than to defend the Mesoamerican ideology, there's no reason to cast doubt on the testimony of the Three Witnesses.
________________

The bottom line is this (adapted from my August post):

Think about this. To accept the Mesoaemerican setting you have to disbelieve two of the three main witnesses to the Book of Mormon: Oliver Cowdery and David Whitmer. The Mesoamerican advocates seek to persuade you these two men were not reliable witnesses when it comes to the issue of Cumorah being in New York.
By contrast, to accept the North American (or Heartland) setting, you fully embrace what these two men said.
________________