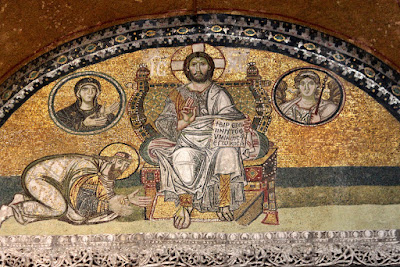 A couple of months ago I was in Istanbul at the Hagia Sophia. It was built in 537 A.D. as a Greek Orthodox basilica and was the headquarters of the Patriarch of Constantinople until 1453 (except from 1204 and 1261 when crusaders converted it to a Roman Catholic cathedral). The interior is full of wonderful mosaics, like the one in this photo.

Mosaics are pictures created by arranging small colored pieces of material, such as flat stones and ceramic tiles. Each individual piece, on its own, tells next to nothing about the scene depicted. If you took all the tiles off and put them in a box, they'd be nothing but rubble.

To create an effective mosaic, you have to know where each piece fits.

I take a similar approach to Book of Mormon historicity and geography.
I seek to reconcile facts with the fewest assumptions possible. Simplicity generally leads to the best results, so long as all relevant facts are accounted for.
Of course, facts don't stand on their own, any more than the random pieces of tile in the box. Each fact is a piece of truth that must be assembled, like a mosaic, to complete the picture. Gaps must be filled by reasonable inferences, for which I consider probabilities and general human nature, adapted as much as possible to what is known of the individuals and culture involved.
[I like the mosaic metaphor better than the puzzle metaphor, because in a puzzle, each piece can only go one place. In a mosaic, pieces are more fluid. It is not their specific shape that determines where they fit, since they are usually all about the same size and shape. Instead, it's their color, combined with the artist's overall vision, that determines where they go. There is a element of flexibility in assembling pieces of evidence in the real world that, to me, is more like a mosaic than a puzzle.]
I tend to be an empiricist; i.e., I think God generally works with natural laws and intervenes obliquely, to use Richard Bushman’s phrase. This preserves our free agency and also motivates us to develop our spiritual talents and skills. I fully believe in divine revelation and inspiration, as well as prophecy. I believe the scriptures are true, in the sense they were written by inspired people and relate actual facts as understood by the authors.
I also believe the scientific method is a valid approach to learning about and explaining the natural world, but I recognize that we all have much to learn.
Hence, I seek to reconcile every available element of Church history, scriptural text, and natural sciences. In my view, the more I examine each of these, the more they work together to reinforce and corroborate a Book of Mormon geography that fits mostly within the United States, circa 1842, with parts of Canada thrown in.
To the extent I have a hierarchy of evidence, I assign the most credibility and reliability to Joseph Smith, Oliver Cowdery, and David Whitmer as compared to Benjamin Winchester, William Smith, Orson Pratt, Wilford Woodruff, and Joseph’s other contemporaries. This is because Joseph and Oliver were the two men who shared the most experiences with the Book of Mormon and divine messengers, from the translation through the restoration of Priesthood keys at the Kirtland temple. David, too, participated in the early events. Plus, David and Oliver were two of the three witnesses and among the first members of the Church.
Consequently, if there is a discrepancy between Joseph, Oliver and David on one side (and they were consistent their entire lives on the question of Book of Mormon geography), and Winchester, Pratt, Woodruff and the others on the other side, I go with the former.
Oliver gave us the first detailed Church history in the letters he wrote to W.W. Phelps and published in the Messenger and Advocate. Among them was Letter VII, which unequivocally described the final battles of the Nephites and Jaredites at the New York hill Cumorah. He said this setting was a fact, and that Joseph helped him write the history. Joseph had his scribes copy the letters into his journal as part of his history, and also approved their republication in the Times and Seasonsand the Gospel Reflector. To me, this is convincing evidence that Letter VII is accurate.
Oliver Cowdery was well qualified to write about the Book of Mormon and early Church history. No one other than Joseph Smith himself was more qualified--and Joseph helped him write the letters.
Think of Letter VII as a whole section of the mosaic, around which the others need to fit.