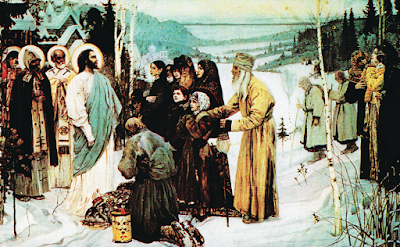 As long as we're thinking of Russia on May Day, we can look at the question of visits of Christ to people around the world. In this painting, the resurrected Christ is visiting people in Russia. I first learned of this painting from a former President of an LDS mission in Russia. There's a good explanation of it at ldsmag here.

I like the idea that Christ visited people around the world. Most of the legends we know of now are not nearly as clear or explicit as the account in the Book of Mormon, but that's one of the things that makes the Book of Mormon so precious. It's an authentic record, containing accounts written during Christ's visit to the Nephites. Perhaps someday we'll have contemporaneous accounts from other cultures.

The Book of Mormon offers an explanation:

3 Nephi 16:1 And verily, verily, I say unto you that I have other sheep, which are not of this land, neither of the land of Jerusalem, neither in any parts of that land round about whither I have been to minister.
2 For they of whom I speak are they who have not as yet heard my voice; neither have I at any time manifested myself unto them.
3 But I have received a commandment of the Father that I shall go unto them, and that they shall hear my voice, and shall be numbered among my sheep, that there may be one fold and one shepherd; therefore I go to show myself unto them.
I think Christ visited people around the world, including Asia, Africa, and Central and South America. These are all "hinterlands" in the context of the Book of Mormon.

Nevertheless, some of the standard Book of Mormon geography arguments cite legends of God visiting the people in Central and South America. These legends include Quetzalcoatl (Mexico) and Manco Capac (Peru). While it makes sense that Christ would visit people in these areas, and 3 Nephi 16 refers to visits to other people, it doesn't make sense to assume that these visits prove the Book of Mormon took place in those areas.

We are happy that the Lord visited these people and improved their societies, sad that they didn't maintain records to transmit the Gospel in its purity to future generations, but happy that at least the Nephites, who lived in North America, did keep their record.