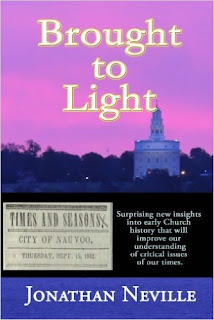 My latest book, Brought to Light, will be officially released this week at an event in Provo (sorry, the venue is full). The book is already on Amazon here and will be on Kindle tomorrow.

This book is intended primarily for readers interested in Church history. It doesn't address Book of Mormon geography, except indirectly. Instead, it looks at authorship of articles in the Times and Seasons that have long been attributed to Joseph Smith. Among other things, I propose that not only did Joseph not write these articles, but he specifically repudiated one of them when he addressed the Relief Society on April 28, 1842. This could have an impact on our understanding of the role of women in the Church. In his address that day, Joseph explained that there was nothing wrong with women blessing the sick by the laying on of hands. I propose a specific reason why he gave that instruction, which may invite a re-evaluation of that topic.

People have asked why I'm writing more Church history. Here's the background. My first Church history book, The Lost City of Zarahemla (2015), proposes that Benjamin Winchester wrote the anonymous articles in the September and October 1842 Times and Seasons that linked the Book of Mormon to Central America. Although I had sought input from some LDS scholars prior to publication, and they accepted advance copies of the book with the understanding that they'd give me such input and address questions to me, instead they refused to work with me and instead published three long attack articles in the citation cartel's online journal, The Interpreter. Fair enough. Although I thought their approach was inefficient and unprofessional, I did appreciate the input and I incorporated their suggestions in the Second Edition of Lost City. (I continue to revise that book as I come across new information.)

My research for Lost City had generated a lot of material that I couldn't fit in that book, so I set it aside and wrote Letter VII and Moroni's America. In the meantime, I received a lot of interest in the Church history aspects of Lost City. People who read Lost City wanted to know more. I organized my notes and research materials and started writing Brought to Light. But that manuscript, too, ballooned beyond reasonableness. (It's astonishing how much material there is, thanks to the Joseph Smith Papers and other digitized records.) Plus, my publisher said people don't want long books. So I took out about half of Brought to Light and put it in yet another book. (This one will be released in about two weeks. It is titled The Editors: Joseph, William, and Don Carlos Smith.)

Brought to Light now focuses primarily on Benjamin Winchester's influence on the Times and Seasons. Scholars have long overlooked his book titled A Synopsis of the Holy Scriptures and Concordance. I knew about this book when I wrote Lost City, but I didn't pay much attention to it because I thought it was just a compilation of scriptures, organized by topic, along with an analysis of the history of the Christian Church. But then I took a closer look and discovered several surprising things.

For example, in Brought to Light I propose that Winchester was the primary author of the article titled "Try the Spirits," published in the Times and Seasons on April 1, 1842. This article has been important for many reasons. The citation cartel has cited it as proof that Joseph wrote the unattributed articles in the Times and Seasons (including the Central American ones). Excerpts from "Try the Spirits" have been included in Teachings of the Prophet Joseph Smith, Teachings of Presidents of the Church: Joseph Smith, and innumerable other books and articles, all on the assumption that Joseph Smith wrote the article.

There are other unattributed articles in the Times and Seasons that I propose Winchester wrote, which I explain in the book. I found the material quite interesting and I hope you do, too.

Here's the table of contents:

BTW, I've stopped giving advance copies to the citation cartel. They never provide input directly to me. Instead, they wait until after publication and then write foolish attack articles in the Interpreter. But in a way, that just gives me more fodder for the blogs.