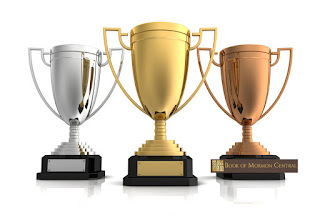 Today we award the Silver Cup for the 2017 Benjamin Winchester Award.

As a reminder, these awards recognize a body of work. They are not personal in nature and do not constitute or imply personal criticism in any way. Every person considered for these awards is an awesome, faithful member of the Church, and every organization considered consists of such individuals. The awards are determined solely on the basis of whether the body of work supports or repudiates the teachings of the prophets about the New York Cumorah.
_____

More background. Benjamin Winchester was a zealous missionary who, with the encouragement of Joseph Smith, started his own newspaper in Philadelphia named the Gospel Reflector.

Winchester was a prolific author who, during 1841-1842, worked for the Times and Seasons in Nauvoo. His zeal caused trouble, though; he was fired from the paper and he returned to Philadelphia, where he worked on his Concordance of the Scriptures and other books. While in Philadelphia, he sent articles to Nauvoo, as he had done before. (The very first issue of the Times and Seasons contains a long letter from Winchester about his missionary efforts in the Eastern States, which you can read here, about half way down near the bottom of page 9: http://www.centerplace.org/history/ts/v1n01.htm).

During 1842, William Smith (Joseph's brother) was editing and publishing a newspaper in Nauvoo titled the Wasp (which you can see here: https://archive.org/details/TheWasp18421843). In my view, the historical evidence shows William was also the acting editor and publisher of the Times and Seasons, although Joseph was listed as the nominal editor. William published Winchester's articles anonymously and over the signature Ed. for editor.

The most infamous of these anonymous articles were the ones published in September and October 1842 that declared Zarahemla was in Guatemala (http://www.centerplace.org/history/ts/v3n23.htm) and that "these wonderful ruins of Palenque are among the mighty works of the Nephites" (http://www.centerplace.org/history/ts/v3n22.htm, p. 814). These anonymous articles were based on a popular travel book by Stephens and Catherwood, documenting their travels in Central America.

Because William Smith published Winchester's anonymous articles in the Times and Seasons, and Joseph Smith was listed as the nominal editor of that newspaper, these articles have been attributed to Joseph ever since. That mistaken attribution led to the development of the theory that the entire Book of Mormon took place in a limited area of Mesoamerica. Because of Winchester's anonymous articles, LDS scholars decided that Cumorah must be in Mesoamerica, which led them to conclude that the prophets and apostles are wrong about the New York Cumorah.

These scholars rationalized their repudiation of the prophets by claiming there are really "two Cumorahs." Hence, M2C (Mesoamerican/two-Cumorahs theory).

This is why, although Benjamin Winchester himself accepted Joseph's teaching about the New York Cumorah, his anonymous articles led to M2C and

Joseph Smith prophesied that Benjamin Winchester would injure the Church as much as he could, and it's difficult to think how anything has injured the Church more than M2C.

Because of M2C, we have CES/BYU teaching the youth that the prophets are wrong. It's actually worse than that, as we'll see tomorrow when we award the Gold Cup.

We name the award after Winchester because when he wrote these anonymous articles, he was an awesome, faithful member of the Church who thought he was doing the right thing. Like our award winners, he probably had no idea that his body of work would lead other faithful members to rationalize their rejection of the teachings of the prophets about the New York Cumorah, a rejection that opens the door to rejecting the prophets about whatever other topic one desires.
_____

When we considered the candidates for the Silver Cup, we thought of one whose influence as an author has made a major contribution to the successful implementation of M2C.

The choice is obvious. The Silver Cup goes to Chris Heimerdinger, author of the book series Tennis Shoes among the Nephites. 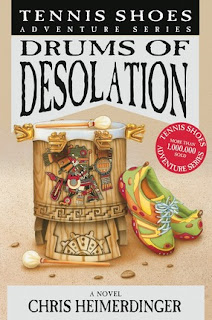 Brother Heimerdinger has sold over a million copies of his books.

Some may think that these books have helped young people "get into" the Book of Mormon. Not just young people, either; adults also have read or listened to Brother Heimerdinger's books.

There's no doubt these books are entertaining and popular. Normally, we would applaud anything that would encourage people to study the Book of Mormon, especially fun books that youth enjoy reading.

But in this case, we have a popular book series that is teaching the youth that the prophets are wrong.

I don't know if Brother Heimerdinger's books directly influenced CES/BYU or vice versa. Maybe they were independently inspired by the M2C intellectuals at FARMS.

Regardless of the genealogy of M2C, Brother Heimerdinger and the M2C citation cartel work well together. 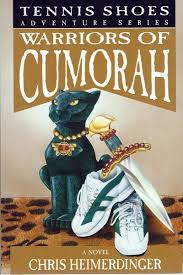 Regarding Cumorah specifically, look at this book:

One vendor describes the plot this way:

When Becky and Josh Plimpton are kidnapped by Todd Finlay, Megan and her two suitors, Ryan and Apollus, attempt to rescue them, but through the mysterious powers of the Rainbow Room, one group ends up in nineteenth-century Jerusalem and the other in central America hundreds of years after the visitation of the Savior to the Nephites.

Imagine that you are growing up in the Church. You read these popular books about the Book of Mormon. You attend seminary and your teachers confirm the Mesoamerican setting you learned from Tennis Shoes among the Nephites. You learn that the "hill in New York" is not the "real" Cumorah; instead, there are "two Cumorahs."

Then you attend BYU and learn the same thing.

You go on a mission and at the MTC, you learn the same thing.

Then, on your mission (or afterwards) someone tells you the truth about the New York Cumorah. For the first time in your life, you learn what the prophets have taught and you think back to all the awesome teachers you had in Church who were telling you that the prophets were wrong. You wonder what else your teachers weren't telling you. We all know what comes next.

Some years ago there was a board game based on the Tennis Shoes series. The board game includes a map that adopts the Sorenson translation of the Book of Mormon and embraces M2C by having kids move through Book of Mormon lands in Mesoamerica.

It shows the "real" Cumorah in southern Mexico, where our friends at Book of Mormon Central continue to search for it.

This is very effective persuasion. Between this and the fantasy maps taught by CES/BYU, kids are so thoroughly indoctrinated in M2C that they cannot accept the teachings of the prophets when they eventually learn about them.

The Tennis Shoes among the Nephites books are worthy successors to Benjamin Winchester's anonymous articles, but that's not the only reason we award Brother Heimerdinger the Silver Cup. In fact, other candidates we considered have come to reject M2C and embrace the teachings of the prophets. Had Brother Heimerdinger done so, he wouldn't have qualified for the 2017 Benjamin Winchester Award.

However, he has earned this recognition in large part because of his ongoing advocacy of M2C. I've addressed this previously here, but recently Brother Heimerdinger has contributed articles to Book of Mormon Central (the winner of the Bronze Cup). He continues to promote M2C and to teach people that the prophets are wrong about the New York Cumorah.

Tip your hats and give a round of applause to
Chris Heimerdinger,
the 2017 Winner of the SilverTrophy of the Benjamin Winchester Award! 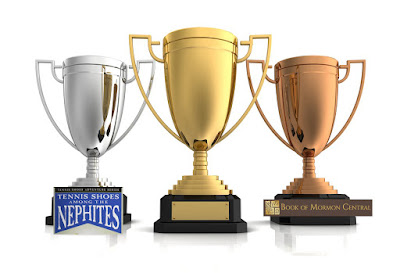