M2C Technique 4. Noah's flood - Imprinting the M2C theory on the minds of vulnerable students and missionaries

Technique 4. Imprinting the M2C theory on the minds of vulnerable students and missionaries (and investigators) through media, artwork, displays, and academic publications.

The easy antidote for M2C is education about Letter VII and the teachings of the prophets. That can be augmented by education about the relevant archaeology, anthropology, geography, geology, etc.

But the M2C intellectuals have erected a strong barrier to acceptance of the prophets. This post gives some examples.

Next week I'm going to announce the recipient of the 2017 Benjamin Winchester award, so I'll save that remarkable body of work for that announcement. But here, let's review a few examples of imprinting.
_____ 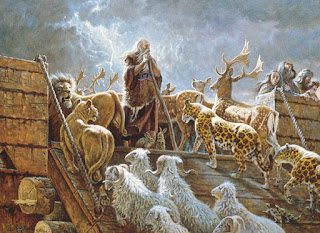 Some people think that the reason for Noah's flood was that the world had become so corrupt that children being born had no chance to choose; i.e., they were surrounded with evil with no hope of seeing examples or hearing teachings of righteousness.

I think we're about at that point in the Church where children growing up will never know what the prophets have taught about the Hill Cumorah in New York.

Children born today will not even have the opportunity to choose to follow the prophets because they are indoctrinated into M2C from a very early age.

When they move on to high school, M2C is reinforced through Seminary, and then they encounter M2C at Institute/BYU, and then again at the MTC.

If/when the youth discover on their own what the prophets have taught, and that their teachers have rejected those teachings, it will cause a serious faith crisis. We all know this; the prophets have warned us about it.

But the M2C intellectuals don't care because they value their own learning and status over the teachings of the prophets.
_____

M2C proponents know that visual persuasion is more effective than verbal or written persuasion. People remember photos and artistic depictions more than words on a page or even sermons. Letter VII and the other teachings of the prophets don't stand a chance compared with the clever and insidious M2C visual persuasion.

Once imprinted, especially when imprinted at an early age, the M2C interpretation of the Book of Mormon becomes indelible. It creates a bias that the child will continue to confirm through adulthood.
_____ 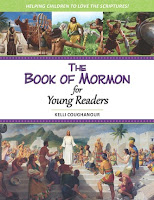 Let's start with The Book of Mormon for Young Readers by Kelli Coughanour. This one is one of the most egregious examples of indoctrination that I know of.

Lately, this book has ranked #5 on Deseret Book's list of bestselling titles.

The Church's Intellectual Property Office allowed Coughanour to use the current edition of the Book of Mormon text, many quotations from the General Authorities, and lots of M2C images owned by the Church.

It's all part of the M2C indoctrination program.

Nowhere in this book will you find the teachings of the prophets about the New York Cumorah.


The interior of the book features several maps of Mesoamerica to teach children where the events took place.

As you look at these maps and illustrations below, ask yourself if the children who read this book will have any realistic chance of eventually accepting what the prophets have taught about the New York Cumorah.

The answer, of course, is no. These maps, seamlessly blended with the "approved" artwork depicting Mesoamerica that the children will see in Primary, Sunday School, Seminary, Institute, BYU, the MTC, etc., will make it effectively impossible for them to even conceive of the Book of Mormon in another location.

They will reject the teachings of the prophets about Cumorah as surely as do the M2C intellectuals. 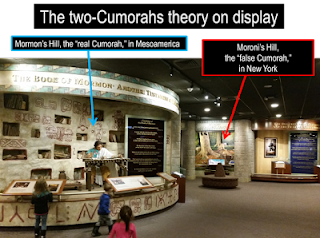 As we've seen, the M2C proponents managed to change the artwork in the missionary editions of the Book of Mormon to teach M2C directly to investigators.

Visual persuasion explains why the two-Cumorahs displays in the visitors centers are so effective. The M2C exhibits subliminally teach millions of people every year about M2C.

The technique is so subtle that I've raised this with Church leaders who denied they were teaching the two-Cumorahs theory until I walked them through the exhibits in detail and pointed out they are depicting Mormon abridging the plates in the depository of records (Mormon 6:6) while surrounded by Mayan iconography. Meanwhile, Moroni is off in the distance, all alone at "the hill in New York.". 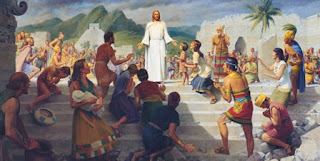 Perhaps the most notorious artwork is the painting of Christ visiting the Americas. I call it "Christ at Chichen Itza."

The painting is ubiquitous, but nowhere more so than in Palmyra. It is on display in the Hill Cumorah visitors center, the Grandin Building, and in at least three places in the Palmyra chapel itself.

The painting has imprinted M2C on the minds of most LDS in the world at this point. Hats off to the M2C proponents for effectively brainwashing members of the Church with this artwork. Now, few members can read the Book of Mormon without picturing this scene in their minds.

This artwork is just one example of how effective the Academic Cycle has been: 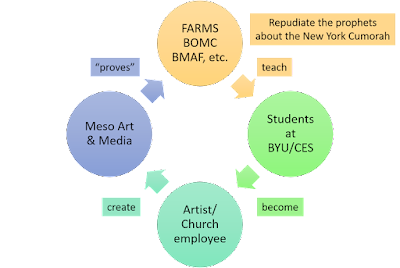 We start with the M2C citation cartel, which repudiates the prophets about the New York Cumorah.

They teach students at BYU/CES about M2C, using the fantasy maps along with the M2C artwork to firmly imprint M2C on the minds of the students.

Then the M2C citation cartel uses the M2C art, media, displays, etc. to "prove" M2C was correct in the first place.

As I've pointed out, even the MTC is using M2C artwork to reinforce M2C in the minds of the missionaries. The unsuspecting missionaries never learn that M2C contradicts the teachings of many of the men after whom the MTC buildings were named! See
http://bookofmormonwars.blogspot.com/2017/11/confusing-messages-at-mtc.html
_____

Again, the easy antidote for M2C is education about Letter VII and the teachings of the prophets. But educating people is much more difficult when you have to overcome decades of imprinting.