There is a clear distinction between the teachings of the prophets on Book of Mormon geography:

(i) they have consistently, specifically, and persistently taught that the hill Cumorah (Mormon 6:6) is in western New York.

(ii) they have consistently, specifically, and persistently taught that the rest of the Book of Mormon geography has not yet been settled.

Here's what we know from the teachings of the prophets:

Certain: Cumorah in New York
Uncertain: everything else
_____

How do the M2C* proponents handle this obvious problem for their theory (because their theory requires that Cumorah cannot be in New York)?

That is, they cite the teachings of the prophets about the uncertainty regarding the rest of Book of Mormon geography and claim those teachings also apply to the Hill Cumorah.

It's easy to see through this subterfuge, but so many people want to believe M2C--they want their M2C bias to be confirmed--that they eagerly accept the confusion. 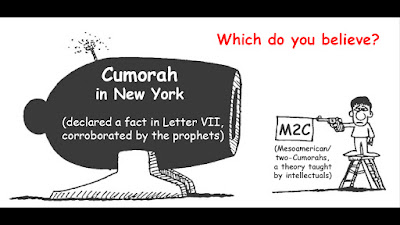 FairMormon is one of the best at using this tactic effectively to confuse members and Church leaders. You can search this blog for "FairMormon" and see lots of examples, but here is one of the most common we hear.

When Harold B. Lee was an Apostle, he identified four false teachings that seminary instructors were perpetuating. One was the idea that Cumorah is not in New York; i.e., M2C.

The M2C proponents have framed his comment to mean that we don't know where Cumorah is. Here is my analysis of this issue: http://bookofmormonwars.blogspot.com/2017/10/fairmormons-famous-harold-b-lee.html.

Because of the confusion caused by M2C, you will often hear such arguments as this: "Mesoamerica, North America, Chile, Baja--they all have their pros and cons, but the prophets have never been specific, so the geography doesn't matter."

Of course, it's not true that the prophets have not been specific about Cumorah.

We can all read Letter VII, Articles of Faith, the General Conference addresses, etc. We know that the prophets have taught Cumorah is in New York.

What about the claim that the geography doesn't matter?

Everyone agrees that the message of the Book of Mormon is more important than its setting. The same is true of the Bible. But the scriptures speak often of promised lands. To say the geography doesn't matter is to say the prophets wasted a lot of time and space discussing a topic that doesn't matter.

And if the geography doesn't matter, why did Joseph and Oliver write and publish and republish Letter VII? Why have so many of the prophets reiterated Letter VII's teaching about the New York Cumorah?

Recall that Letter VII was a response to the anti-Mormon claim that the Book of Mormon was fiction. That anti-Mormon claim is just as prevalent today. But now, instead of following the course established by Letter VII, we have Church employees and teachers at BYU/CES who claim the geography doesn't matter.

The reason: they can't reconcile the teachings of the prophets about the New York Cumorah with their Mesoamerican dogma, so they don't want members of the Church to even know what the prophets have taught. They rationalize their repudiation of the prophets by saying the geography doesn't matter.

You can cite Letter VII and all the other specific, prophetic teachings about the New York Cumorah to M2C proponents, but it won't make any difference. They are convinced that the prophets have left it up to the intellectuals--meaning, themselves and the entire M2C citation cartel of FairMormon, BOMC, BYU Studies, etc.--to solve the question of geography.

They will continue to confirm their bias regardless of what the prophets say.
_____

*M2C is the acronym for the Mesoamerican/two-Cumorahs theory.
Posted by jonathan3d at 11:30 AM