Book of Mormon Central (BOMC) recently put an old no-wise on Facebook. This one asks, "Why Did the Gadianton Robbers Wear a Lamb Skin?" You can see the original here:
https://knowhy.bookofmormoncentral.org/content/why-did-the-gadianton-robbers-wear-a-lamb-skin

"Behold, great and terrible was the day that they did come up to battle; and they were girded about after the manner of robbers; and they had a lamb-skin about their loins, and they were dyed in blood"

As usual, BOMC desperately tried to explain how Mayan Nephites would have used another animal and call it a "lamb." Or else Joseph Smith mis-translated the plates again.

BOMC resorts to another illusory "correspondence" based on this logical argument:

This is illusory because it is more difficult to find an ancient human society that did not have loincloths, aprons, girdles, etc. than to find one that did. They are standard apparel at Indian Pow-Wows even today: http://forums.powwows.com/f13/breechcloth-aprons-50190/

We don't have to search for "correspondences" in Mesoamerica if we simply believe what Joseph Smith taught.

Here's a typically ridiculous BOMC rationalization with its illustration of Aztec warriors: 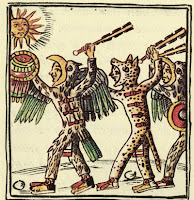 The shock-factor of the lamb-skin is heightened when put in the context of Mesoamerican intimidation tactics. The donning of animal pelts was intended to create a fearful spectacle,11 so it may have been unexpected for the Gadianton robbers to appear in the skins of a non-aggressive herbivore—like a lamb. Brant Gardner explained, “Mesoamericans were well known to wear animal skins, though the animal would typically be a ferocious jaguar, not a peaceful ‘lamb.’”12

These so-called "Mesoamerican intimidation tactics" are ubiquitous in human cultures. They are standard apparel

Compare this with an example from another culture: 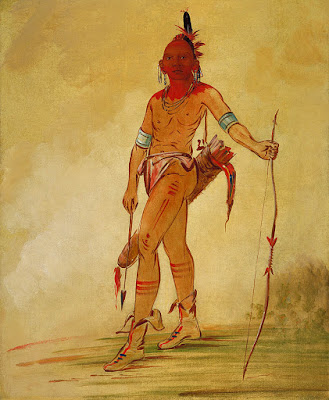 Luce Center Label
“The Osages have been formerly, and until quite recently, a powerful and warlike tribe: carrying their arms fearlessly through all of these realms; and ready to cope with foes of any kind that they were liable to meet. At present, the case is quite different; they have been repeatedly moved and jostled along, from the head waters of the White river, and even from the shores of the Mississippi, to where they now are; and reduced by every war and every move.” (Catlin, Letters and Notes, vol. 2, no. 38, 1841; reprint 1973)

Or another one, again with the loincloth and red staining: 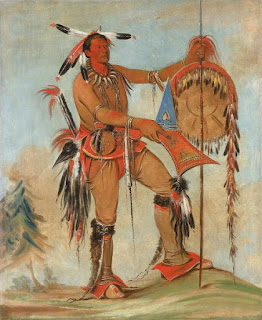 Luce Center Label
George Catlin painted this portrait at a Sac and Fox village in 1835. He described the subject as “holding a handsome war-club in his hand.” (Catlin, 1848 Catalogue, Catlin’s Indian Gallery, SAAM online exhibition


If you read only the publications of BOMC and the rest of the M2C citation cartel, you won't recognize these paintings. But maybe you'll recognize this one:
This is the tribe with whom Joseph Smith met in August 1841, not long after Catlin painted these paintings. Notice the loincloths worn by the Lamanites in this painting.

Notice I said Lamanites. The current Church History department wants us to think this was a quaint folk belief on the part of "early members of the Church," but let's look at what Joseph Smith himself said, which you can read in the Joseph Smith papers here:
http://www.josephsmithpapers.org/paper-summary/history-1838-1856-volume-c-1-addenda/10

12 August 1841
<​12th​> Thursday. A considerable number of the Sac & Fox Indians have been for several days encamped in the neighborhood of Montrose. The ferryman this morning brought over a great number on the Ferry boat and two Flat boats for the purpose of visiting me. <​The Military band, and a detachment of Invincibles were on shore ready to receive & escort them to the grove, but they refused to come on shore until I went down.​> I accordingly went down, and met “Keokuk,” “Kish-ku-Kosh,” “Appenoose,” and about 100 Chiefs and Braves of those tribes with their families at the landing, introduced my brother Hyrum [Smith]  to them, and after the usual salutations, conducted them to the meeting ground in the grove, and instructed them in many things which the Lord had revealed unto me concerning their Fathers, and the promises that were made concerning them in the Book of Mormon; and advised them to cease killing each other and warring with other tribes, and keep peace with the whites; which was interpreted to them. Keokuk replied he had a Book of Mormon at his Wickaup which I had given him some years before. “I believe,” said he, “you are a great and good man; I look rough, but I also am a Son of the Great Spirit. I’ve heard your advice— we intend to quit fighting and follow the good talk you have given us.” After the conversation they were feasted on the green with good food, dainties, and melons by the brethren; and they entertained the spectators with a specimen of their dancing.

Here's what he wrote in the Wentworth letter, published in March 1842, about 6 months after he taught the Sac and Fox:

I was also informed concerning the aboriginal inhabitants of this country, and shown who they were, and from whence they came; a brief sketch of their origin, progress, civilization, laws, governments, of their righteousness and iniquity, and the blessings of God being finally withdrawn from them as a people was made known unto me: I was also told where there was deposited some plates on which were engraven an abridgement [abridgment] of the records of the ancient prophets that had existed on this continent….

The principal nation of the second race fell in battle towards the close of the fourth century. The remnant are the Indians that now inhabit this country.

Thanks to the M2C influences in the Church History, Correlation and Curriculum departments, members of the Church will never learn about this.

In 1833, Joseph had written a letter to The American Revivalist which was never published, but here's what he wrote:

After this letter was not published in its entirety, Joseph Smith sent a second letter to N. E. Seaton, Rochester:

I was somewhat disappointed on the receiving my paper with only a part of my letter inserted in it. The letter which I wrote you for publication I wrote by the commandment of God.” (History of the Church 1: 326)

Lots more images of actual Lamanites who are red-stained and wearing loincloth (or apron or girdle) are available.