"Maps of the opposition" and fifth columnists

We were in Palmyra for a few days, working on the new historical display. I'll post photos and descriptions of that next week.

On Sunday in the Palmyra Ward, I noticed this quotation from Harold B. Lee written on the white board at the front of the room:

"There are carefully charted on the maps of the opposition the weak spots in every one of us. They are known to the forces of evil."

This was from a talk Elder Lee gave in General Conference on September 30, 1949.* You can see it here:
https://archive.org/stream/improvementera5211unse#page/n49/mode/2up

Look at the map that accompanies the quotation:

This is the CES map of the Book of Mormon that all LDS students have been learning for the last few years.

It is roughly the same as the infamous map that BYU is teaching all new students--the one that teaches students to understand the scriptures as taking place in a fantasy world.

"Maps of the opposition" is an ideal term for these fantasy maps because they are teaching students throughout the Church that the prophets and apostles are wrong about the New York Cumorah.

Elder Lee's talk was titled "Powers of the Gospel." Here's how he introduced the above quotation:

"Using words that are common to modern warfare, we might say that there are in the world today fifth columnists who are seeking to infiltrate the defenses of every one of us, and when we lower those defenses, we open avenues to an invasion of our souls."

This is precisely the tactic used by the BYU/CES teachers who seek to persuade their students that they should believe the intellectuals instead of the prophets and apostles.

Elder Lee was speaking just a few years after the end of World War II, and I suspect some readers here are unfamiliar with the term "fifth columnist." Here's a pretty good definition from wikipedia:

A fifth column is any group of people who undermine a larger group from within, usually in favor of an enemy group or nation. The activities of a fifth column can be overt or clandestine. Forces gathered in secret can mobilize openly to assist an external attack. This term is also extended to organized actions by military personnel. Clandestine fifth column activities can involve acts of sabotage, disinformation, or espionage executed within defense lines by secret sympathizers with an external force.
ORIGIN During the Siege of Madrid in the Spanish Civil War, Nationalist general Emilio Mola told a journalist in 1936 that as his four columns of troops approached Madrid, a "fifth column" (Spanish: Quinta columna) of supporters inside the city would support him and undermine the Republican government from within.
The term was then widely used in Spain. Ernest Hemingway used it as the title of his only play, which he wrote in Madrid while the city was being bombarded, and published in 1938 in his book The Fifth Column and the First Forty-Nine Stories.
During World War II, the government used the concept of "Fifth Columnists" to motivate the public and show them how they could help or hinder the war effort. There's a detailed "Fifth Column" map of the United States you can see here: https://bostonraremaps.com/inventory/1941-constitutional-education-league-map/ 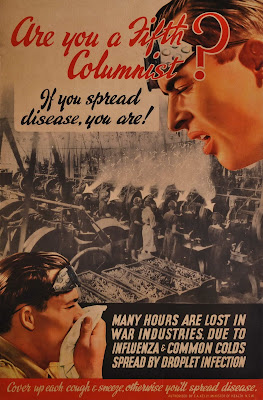 You can see why a "Fifth Column" is so effective. It exists inside the defenses, so people don't even recognize it and have no sense of danger.

People can be part of a "Fifth Column" intentionally or unintentionally. As the wikipedia article noted, sabotage, disinformation and espionage are all fifth column activities.

But you can also be a Fifth Columnist by innocently undermining the effort when you act out of ignorance.

This poster, for example, asks, "Are you a Fifth Columnist? If you spread disease, you are!"

In my view, anyone who teaches members of the Church to disbelieve the prophets and apostles is a Fifth Columnist.

I think this applies to anyone who teaches that the prophets and apostles were wrong about the New York Cumorah. Harold B. Lee himself listed the idea that Cumorah is not in New York among other false teachings he'd heard from CES teachers, as I discussed here.

Many people in the Church don't realize that M2C (the Mesoamerican/two-Cumorahs theory) is a direct repudiation of the prophets. Many members have never been taught about Letter VII and its context and progeny. If they read Elder Talmage's Articles of Faith, maybe they didn't notice what he wrote about the New York Cumorah. They don't take the time to review past teachings from General Conference about the New York Cumorah.

Maybe they rely on the lesson manuals that have omitted key teachings on this point.

Or maybe they rely on what they've been taught in CES or at one of the BYU campuses. Or maybe they simply visited the North Visitors Center on Temple Square.

It's one thing to act in ignorance because you've never been taught what the prophets and apostles have taught about the New York Cumorah. That's how we end up with teachers throughout the Church peddling M2C without understanding that the Mesoamerican setting means the "real Cumorah" is not in New York. These members of the Church don't realize they are teaching their people to disbelieve the prophets and apostles. Most of them believe there is one Cumorah and it is in New York even without reading Letter VII.

But it's something altogether different when you're the one who is suppressing and opposing the teachings of the prophets and apostles.

It doesn't matter what your position is--except that the more trust you are given, the more serious the problem is.

That's why I think it's such a serious matter that our own BYU/CES teachers are spreading the M2C disease to thousands of LDS students every day.

In this context, I'm referring to the New York Cumorah, but there have been some other examples of Fifth Columnists recently that I hope to have time to address soon.

"There are carefully charted on the maps of the opposition the weak spots in every one of us. They are known to the forces of evil, and just the moment we lower the defense of any one of those ports, that becomes the D Day of our invasion, and our souls are in danger."

D Day took place about 5 years before Elder Lee's sermon, so it was fresh on the minds of his audience. If you're unfamiliar with D-Day, go to this link: https://www.history.com/topics/world-war-ii/d-day

Elder Lee has given us a powerful metaphor here. When do members of the Church lower their defenses?

When they are attending CES/BYU.

The last thing parents and students expect in these settings is a direct assault on the teachings of the prophets and apostles. And, to be sure, most of what BYU/CES teachers present in these classes is true and uplifting.

That's what makes the subtlety of M2C all the worse. The defenses of the students are down when they enter these classrooms. They trust their teachers. Neither they nor their parents would dream that their teachers are about to persuade them to disbelieve the prophets and apostles.

And yet, that's what is happening right now in a CES/BYU classroom near you.

The rest of us still believe in the prophets and apostles, of course.