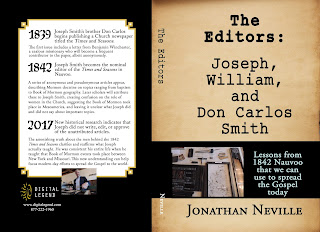 I've mentioned this book before on this blog. I actually wrote it a year ago but never released it because I was waiting for something. Not long ago, the Joseph Smith Papers released some new material that fit right in, so I finished the book and I'm going to introduce it Saturday at the conference.

I have it on Amazon now for my beta readers. Regular blog readers have asked me to let them know, so here it is. You can click on the image of the cover and it takes you right to the page on Amazon.

As of this writing, Amazon is still showing an old dummy cover. The actual cover is the one in this post.

This is a fairly detailed Church history book. I go through every reference to Joseph's activities during 1842 while he was the nominal editor of the Times and Seasons.

Here are the main points for those who don't want to read the detailed history and references.

- After his first editors, WW Phelps, Oliver Cowdery, and Warren Cowdery, left the Church, Joseph trusted only his brothers William and Don Carlos to be editors (until Don Carlos died and William caused too much trouble, but even then, Joseph allowed William to edit the newspaper in New York called The Prophet).
- William was the nominal and actual editor of the Wasp at the same time Joseph was the nominal but William was the actual editor of the Times and Seasons. W.W. Phelps contributed anonymously to both papers.
- Joseph never once connected the Book of Mormon to Central America.
- The famous "Bernhisel letter" was drafted by Wilford Woodruff; Joseph probably never even saw it.
- Joseph never read or cared about the Stephens and Catherwood books.
- Joseph adapted the Wentworth letter from Orson Pratt's pamphlet and edited out Pratt's hemispheric and Mesoamerican ideas. Phelps wrote much of the Wentworth letter, but Joseph wrote the key portions, including the corrections to Pratt's work regarding the Book of Mormon geography.
- Don Carlos said Joseph gave him "essays on the glorious Priesthood" to publish in the Times and Seasons. The essays were actually Oliver Cowdery's 8 letters (including Letter VII).
- W.W. Phelps played a key role at the Times and Seasons and probably wrote the introduction to the Book of Abraham that claims it was a translation of the papyrus.