The mothers of invention of the Mesoamerican theory 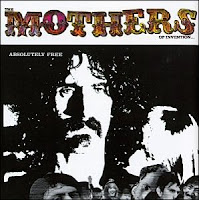 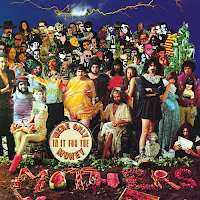 I'm continuing to hear some old objections to the North American setting for the Book of Mormon, so apparently I need to comment on them again as I have time. I'll frame these posts as looking at the mothers of invention of the Meosamerican theory.
______________

[Skip this section if you don't want to read about the reference to the Mothers of Invention.

[When I was growing up, the Mothers of Invention was my choice of rock band for teenage rebellion. I was reminded of this recently on a Delta flight. The music list included "Brown Shoes Don't Make It" from the "Absolutely Free" album. The Mothers' records are so awful that my mom actually broke my vinyl album in half so I would stop listening to it. Maybe some day we'll be able to do the same with the Mesoamerican theory that has caused so much trouble.

[The album I thought was the most clever was "We're Only in it for the Money," a parody of Sgt. Pepper's. I have heard this complaint from both sides of the Book of Mormon geography issue; i.e., I've heard that Mesoamerican advocates promote their theory with books, tours and conferences, while "Heartlanders" do the same. In my view, neither side is in this for the money. Advocates on both sides are promoting their beliefs because they love the Book of Mormon and want to share its message with the world (and encourage LDS people to study it more). That said, there are costs involved with any educational pursuit. I have spent far, far more money on Mesoamerican books and conferences than on North American books and conferences, and certainly LDS people in general have done the same. Mormon's Codex alone costs $59.99 at Deseret Book. Along these lines, I have to say, I hope I never again hear a BYU-affiliated (i.e., tithe-payer subsidized) scholar/educator complain about other people selling books and tours. It's bad enough that tithing money has been used in the past to support the Mesoamerican theory.]
______________

One of my favorite objections to the North American setting is the old meme that "The River Sidon flows north."

The mother of invention of the north-flowing river was Orson Pratt's hemispheric model, not a careful analysis of the text. Joseph Smith specifically rejected Pratt's ideas in the Wentworth letter, but that hasn't stopped anyone from promoting the progeny of Pratt's ideas anyway.

Here's my conclusion for those who don't want to wade through the explanation:

Here's how the idea of a Mesoamerican north-flowing river Sidon started. In the 1920s, some RLDS and LDS scholars convinced themselves that the Book of Mormon took place in a limited area of Central America. This meant the "real" Cumorah could not be in New York, which led to the bizarre "two Cumorahs" theory.

This theory also presented the problem that the only two significant rivers in the area of Mesoamerica flow north. Therefore, these scholars concluded, the river Sidon must flow north. To justify their theory, they imposed an interpretation on the text that has become their default standard. It's an example of the "ruling theory" that I mentioned in my last post.

If you went to the link I provided in that post, you saw this explanation of the result of the "ruling theory" approach:

"Our premature explanation can become a tentative theory and then a ruling theory, and our research becomes focused on proving that ruling theory. The result is a blindness to evidence that disproves the ruling theory or supports an alternate explanation. Only if the original tentative hypothesis was by chance correct does our research lead to any meaningful contribution to knowledge."

You find this happening throughout the writings of the LDS scholars and educators who promote the Mesoamerican setting.
______________________

Another of my favorites is BYU Studies. This mostly excellent journal is, sadly, deeply infected with Mesomania. Right on the main page, they have a link to "Book of Mormon Charts," here: https://byustudies.byu.edu/book-of-mormon-charts. This includes a list of "Ten Essential Features of Book of Mormon Geography." You have to see this to believe it.

Go to this link: https://byustudies.byu.edu/charts/13-149-ten-essential-features-book-mormon-geography. Most of these "essential features" are illusory and based on circular reasoning and confirmation bias (i.e., designed to "prove" the false Mesoamerican theory), but look at number 5.

Here's an excerpt from my book Moroni's America that addresses this specific issue.

[i] There are some small rivers in North America that flow north, which is the basis for some proposed geographies in limited areas such as western New York, but these models have other problems. Besides, a north-flowing river contradicts the text.
[ii] The discussion of the River Sidon in this section is a response to a blog entry titled “River Sidon South to North,” dated November 8, 2011, by Kirk Magleby. It is located online here: http://bit.ly/Moroni125. Brother Magleby is one of the founders of FARMS and is an outstanding scholar of the Book of Mormon. His posts on his blog are thoughtful and detailed. I think his focus on Mesoamerica has affected his interpretations of the text, but his analysis of the various issues is superb.
[iii] Ibid. The original answers are designated by A1, A2, etc.