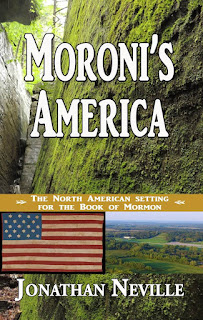 I wrote Moroni's America for members and nonmembers because I wanted to explain why Joseph Smith and Oliver Cowdery insisted that Cumorah was in New York.

Anyone who still believes in a non-New York Cumorah, whether in Mesoamerica or Chile or Baja or Malaysia or Eritrea, ought to read Moroni's America, if only to understand why so many members of the Church accept what Joseph and Oliver said about Cumorah.

You might enjoy reading the book because it is the only chapter-by-chapter explanation of the North American setting. (Amazon or Deseret Book).
_____________

Once I realized that Joseph Smith had nothing to do with the anonymous articles in the Times and Seasons that were the genesis of the Mesoamerican theory, the next step was to analyze the text itself.

My wife made a list of around 300 geography-related verses and told me she wanted to know where everything took place. It was an awesome challenge. I started with 1 Nephi 1 and ended with Moroni 10.

I was actually surprised to see how well the Book of Mormon describes North America.

If you ignore everything Joseph Smith and Oliver Cowdery said, and you just take the text and try to match it to a real-world setting, the closest fit, anywhere on the planet, is North America.

Nowhere else is even close.

I wrote Moroni's America to explain how, IMO, the text describes North America.

Then, when you consider what Joseph and Oliver actually said and wrote, as well as what their successors have said and written, including in General Conference, and you factor in the prophecies and promises, and the fulfillment of those prophecies, you realize that no matter how you look at the question of Book of Mormon geography, everything points to the North American setting.

This has become best known as the Heartland model. I like Moroni's America because the significance is not merely geography, but the prophetic destiny and responsibility of the covenant land of promise, exemplified by General Moroni and clearly delineated by Moroni son of Mormon.
_______________

Mesoamerican promoters like to say they are using the text as their primary rationale for locating Book of Mormon events in Central America. The text, they claim, is the highest authority on their hierarchy of evidence.

This is a cognitive fallacy, of course. Technically, it's choice-supportive bias, also called post-purchase rationalization. It is a cognitive bias whereby people retroactively justify choices they've made. Once you decide where you want the Book of Mormon to have taken place, the text is vague enough that you can adapt it to almost any site in the world. You can "see" any culture in the text as well.

The common human tendency toward choice-supportive bias is why I take the approach of starting with what Joseph and Oliver said, and then seeing how the text supports and corroborates what they said. When you do this, Cumorah is in New York and everything else flows from there.
________________

Ironically, the Mesoamerican promoters started out with that same process. The difference is that they chose the anonymous Times and Seasons articles instead of Letter VII and other statements by Joseph, Oliver, David Whitmer, etc.

Incredibly, they chose to accept what Joseph did not say instead of what he did say.

This is why they have come full circle to the point now that to continue to rationalize their choice of Mesoamerica, they must outright reject what Joseph and Oliver actually said.

Although they'll deny it if you ask them, you can follow the history and see that the Mesoamerican promoters first decided where the events took place, based on the 1842 Times and Seasons articles, before they even considered the text.

The authors of those articles, some combination of Benjamin Winchester, William Smith, and W.W. Phelps, made their claims based on discoveries of ruins in Central America. They barely analyzed the text, and they didn't care that the ruins themselves were anachronistic in terms of the Book of Mormon. They were focused on promoting the Book of Mormon for missionary work, and if that meant linking it to sensational finds in Central America, then why not?

Their successors, the modern-day Mesoamerican promoters, have pursued a fundamentally irrational approach. They acknowledge that the anonymous articles were incorrect (i.e., Zarahemla is not Quirigua, the ruins don't line up to Book of Mormon time frames, etc.). Some even acknowledge that Joseph Smith had nothing to do with the anonymous articles.

Yet they persist in finding "correspondences" between Central America (Mesoamerica) and the text, all the while repudiating what Joseph and Oliver taught.

Their theory is not only completely detached from Joseph Smith and Oliver Cowdery and David Whitmer and the rest. Their theory outright contradicts what Joseph, Oliver, David and the others said! They have reached the point where they are trying to persuade people not to believe Joseph and Oliver and David, solely because of the intense desire to rationalize their "purchase" of the Mesoamerican setting.

This is why they are drifting in confusion and sophistry to justify their theories. It's apparent in everything they write about the topic. They "can't unsee" Mesoamerica any longer. I call that Mesomania, a book I'll summarize in the next few days.
___________________

People ask why I keep writing about this. The reason is that Mesomania continues to confuse people and cause them to be disturbed in their faith. When the visitors centers and the missionary edition of the Book of Mormon itself continue to teach Mesomania, it's not difficult to see why investigators and members alike are confused.

I'm optimistic that the right thing will happen. Eventually.